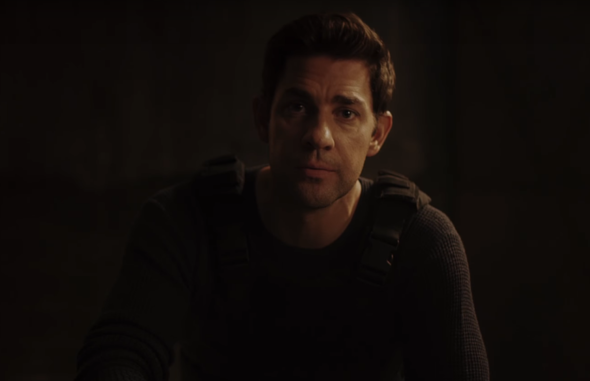 Based on the book series, the drama “follows Ryan as he uncovers a pattern in terrorist communication that launches him into the center of a dangerous gambit with a new breed of terrorism that threatens destruction on a global scale.” The cast includes John Krasinski, Wendell Pierce, and Abbie Cornish.

Tom Clancy’s Jack Ryan is slated to premiere on Prime Video in 2018.

Today, October 3, 2017, Amazon premiered footage from the highly-anticipated new series Tom Clancy’s Jack Ryan introducing viewers to the famed and lauded Tom Clancy hero, Jack Ryan, played by John Krasinski (13 Hours, The Office). Additionally, this Saturday, October 7, at New York Comic Con, the cast of the brand-new series will make its first-ever appearance, along with the debut of the exhilarating first teaser trailer during the series panel.

The one-hour, eight-episode dramatic series follows an up-and-coming CIA analyst thrust into a dangerous field assignment for the first time. The series follows Ryan as he uncovers a pattern in terrorist communication that launches him into the center of a dangerous gambit with a new breed of terrorism that threatens destruction on a global scale. Amazon will debut Tom Clancy’s Jack Ryan, from Paramount Television and Skydance Television, in 2018 on Prime Video. The series also stars Wendell Pierce (Ray Donovan, The Wire) and Abbie Cornish (Limitless). It is executive produced by Carlton Cuse (Lost, Bates Motel) who also serves as the showrunner, Krasinski, Michael Bay’s Platinum Dunes, and Graham Roland (Almost Human), who wrote the pilot based on a story he and Cuse developed.

An Amazon Prime Exclusive Series, Tom Clancy’s Jack Ryan is an action-packed spy thriller that will keep the audience on the edge of their seats through every twist and turn. Below is a link to the footage of Krasinski as Jack Ryan. We look forward to working with you to coordinate coverage timed to the 2018 premiere:

What do you think? Are you a fan of the Jack Ryan book series? Will you watch the Amazon series?

Definitely a fan of the books and very much looking forward to the Amazon series. The footage shown looks like high production values. Seems cruel to the viewers to tease so far in advance!