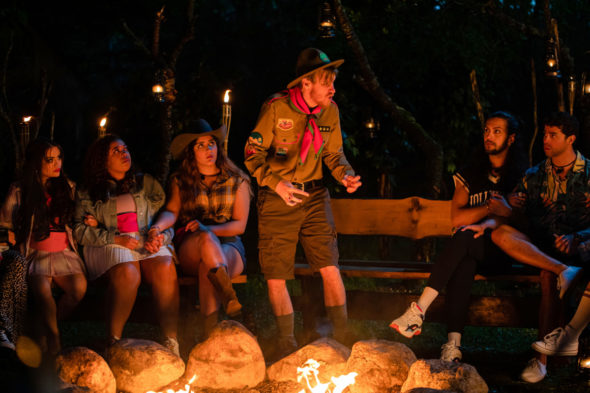 Which campers will survive the second season of the Killer Camp TV show on The CW? As we all know, the Nielsen ratings typically play a big role in determining whether a TV show like Killer Camp is cancelled or renewed for season three. Unfortunately, most of us do not live in Nielsen households. Because many viewers feel frustrated when their viewing habits and opinions aren’t considered, we invite you to rate all of the second season episodes of Killer Camp here.

A CW reality series with a scary whodunnit twist, the Killer Camp TV show is an homage to campy horror flicks from the 1980s. Camp Counselor Bobby (host Bobby Mair) welcomes a mix of 13 unlucky American and British campers to Camp Pleasant. They’re ready for fun but are quickly reminded that not everyone will survive. After all, one of them is a killer who will engage the help of homicidal Handyman Bruce to kill their new friends, one by one. The campmates are immediately thrown into several challenges to try to bank cash for their prize fund or, to win immunity. All the while, the killer among them tries to sabotage the games. As campers are “killed” by Bruce in humorous and grisly ways, the survivors work to expose the killer among them for a piece of the $50,000 cash prize.

What do you think? Which season two episodes of the Killer Camp TV series do you rate as wonderful, terrible, or somewhere between? Do you think that Killer Camp should be cancelled or renewed for a third season on The CW? Don’t forget to vote, and share your thoughts, below.

I enjoy Killer Camp very much because it’s different and just campy enough to be really funny. I love the stories at the end that counselor Bobby tells. And I am not a teeny bopper. I am over 60 and also love Amazon .