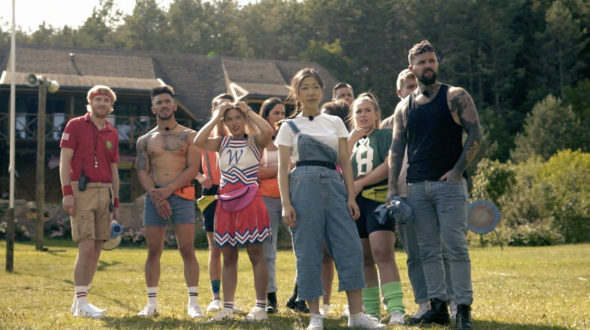 How horrific is the first season of the Killer Camp TV show on The CW? As we all know, the Nielsen ratings typically play a big role in determining whether a TV show like Killer Camp is cancelled or renewed for season two. Unfortunately, most of us do not live in Nielsen households. Because many viewers feel frustrated when their viewing habits and opinions aren’t considered, we invite you to rate all of the first season episodes of Killer Camp here.  *Status Update Below.

A CW reality series with a whodunnit twist, the Killer Camp TV show is an homage to campy horror flicks from the 1980s. On the show, 11 British strangers are shocked to discover they aren’t actually going on a fun new reality show called Summer Camp. Instead, they’re participating in a horror whodunnit called Killer Camp. Each night someone from the group will be “murdered” and the remaining players must determine who amongst them is the secret murderer. The object of the game is to earn cash while avoiding being “killed” and therefore, eliminated from the contest. The murderer bumps off fellow campers in ever more extreme, hilarious, and inventive ways. Meanwhile, it’s the job of the remaining platers to figure out who is responsible before it’s too late. The killer eliminates an innocent every night, assisted by the evil camp handyman aka Bruce, who actually executes the bloody and humorous death scenes. Comedian Bobby Mair hosts the program as Camp Counselor.

What do you think? Which season one episodes of the Killer Camp TV series do you rate as wonderful, terrible, or somewhere between? Do you think that Killer Camp should be cancelled or renewed for a second season on The CW? Don’t forget to vote, and share your thoughts, below.

I saw season 1 and loved it, I feel that 5 days was not enough tho, we need it on longer to see if the killer is the 1 left at the end or not. Me n my uncle are really hopin for a season 2 as we really enjoyed it that much.

I watch the first episode of Killer Camp and I am shocked and surprised that I still like the show. I still believe that this show got on the air was thank COVID 19 and I got a bad feeling that CW will renewal the show for the second season.

OMG, aren’t things bad enough in our country right now without putting on trash like this?
I hope it’s not watched & gets canceled!