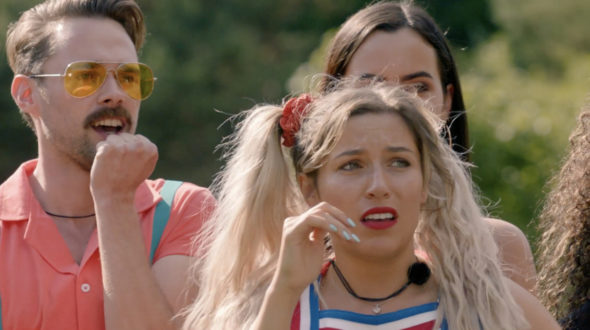 Bruce the horrible handyman is returning. The Killer Camp horror reality show has been picked up for a second season on The CW but this time around, the British series will be remade for the U.S. with a mix of American and British campers. Comedian Bobby Mair returns as the host.

The network is also remaking Britain’s Would I Lie To You? comedy panel show which elevates the “art of lying.” In addition, The CW has acquired two seasons of the British version.

Premiere dates will be announced at a later date. Here are some additional details:

Network Orders Original U.S. Versions of British Series “Would I Lie To You?” and “Killer Camp”

Additionally, The CW Has Acquired Episodes of British Edition of “Would I Lie To You?” For Broadcast in the U.S.

The CW Network continues to expand its growing alternative programming slate by ordering original U.S. versions of British comedy panel series WOULD I LIE TO YOU? and the satirical British horror whodunit reality competition series KILLER CAMP. Additionally, to introduce U.S. viewers to the series, The CW has acquired two seasons of the British version of WOULD I LIE TO YOU?. Specific premiere dates for both series will be announced at a later time.

A hilarious comedy panel show that elevates the “art of lying,” the British series, WOULD I LIE TO YOU, is hosted by Rob Brydon (“Gavin & Stacey”) and features Lee Mack (“Not Going Out”) and David Mitchell (“Phineas and Ferb”) as lightning-quick team captains joined by a stellar cast of celebrity guests who weave elaborate tales… that may or may not be the truth. Competing teams then ask questions and watch body language to determine which are crazy but true, and which are made-up stories. Created by Peter Holmes, who executive produces with Rachel Ablett and Ruth Phillips, Britain’s WOULD I LIE TO YOU? is produced by Zeppotron (A Banijay Company). For the U.S., Banijay’s Emmy Award-winning Truly Original is producing a new, original WOULD I LIE TO YOU? series exclusively for The CW Network, with Steven Weinstock, Glenda Hersh, Robert King, Michelle King, Liz Glotzer and Aasif Mandvi executive producing.

The CW’s U.S. version of KILLER CAMP will return to “Camp Pleasant” as a mix of 13 unlucky American and British campers navigate through new deadly twists and surprises while competing to expose the “killer” among them for a share of the $50,000 cash prize. Each night one of them will be viciously dispatched by camp handyman Bruce, who’s back with counselor Bobby (Comedian Bobby Mair) with a whole host of surprises and hilariously elaborate new murders. Executive produced by Karen Smith, Steph Harris and Ben Wilson, KILLER CAMP is produced by Tuesday’s Child Television and distributed by Keshet International. The British version of KILLER CAMP aired on The CW last summer.

WOULD I LIE TO YOU? and KILLER CAMP join The CW’s growing roster of original alternative series which include MASTERS OF ILLUSION, MYSTERIES DECODED, PENN & TELLER: FOOL US, WHOSE LINE IS IT ANYWAY? and WORLD’S FUNNIEST ANIMALS.

What do you think? Did you enjoy the Killer Camp TV show on The CW? Will you check out the Would I Lie to You? series?