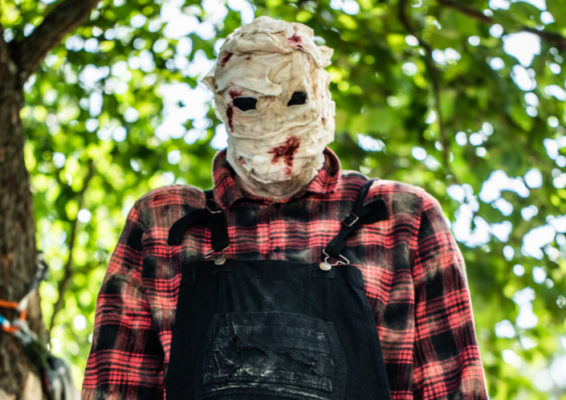 Should Bruce the handyman return for more mayhem? Has the Killer Camp TV show been cancelled or renewed for a second season on The CW? The television vulture is watching all the latest cancellation and renewal news, so this page is the place to track the status of Killer Camp, season two. Bookmark it, or subscribe for the latest updates. Remember, the television vulture is watching your shows. Are you?

Airing on The CW television network, the Killer Camp TV show is an homage to campy horror flicks from the 1980s. On the show, 11 British strangers are shocked to discover they aren’t actually going on a fun new reality show called Summer Camp. Instead, they’re participating in a horror whodunnit called Killer Camp. Each night someone from the group will be “murdered” and the remaining players must determine who amongst them is the secret murderer. The object of the game is to earn cash while avoiding being “killed” and therefore, eliminated from the contest. The murderer bumps off fellow campers in ever more extreme, hilarious, and inventive ways. Meanwhile, it’s the job of the remaining platers to figure out who is responsible before it’s too late. The killer eliminates an innocent every night, assisted by the evil camp handyman aka Bruce, who actually executes the bloody and humorous death scenes. Comedian Bobby Mair hosts the program as Camp Counselor. The series originated on ITV2 in the UK.

The first season of Killer Camp averages a 0.12 rating in the 18-49 demographic and 434,000 viewers. Find out how Killer Camp stacks up against other The CW TV shows.

Will The CW cancel or renew Killer Camp for season two? This series aired on ITV2 in the UK in Fall 2019 so it likely doesn’t cost The CW much to air. Given that part of the concept is to initially keep the true nature of the series a secret from contestants, it seems like this show is a one-and-done kinda show. ITV2 may order a second season but, given the ratings, I can’t imagine that The CW is itching for more. I’ll update this page with breaking developments. Subscribe for free alerts on Killer Camp cancellation or renewal news.

3/10/21 update: Killer Camp has been renewed for a second season on The CW.

What do you think? Are you glad that the Killer Camp TV show has been renewed for a second season?

I found this show by accident already 3 shows in! Passed info to friends and we love it! Don’t cancel please. So sick of the same old shows. This one is a big hit! Advertise more and viewership will definitely go way up!

Wow .10 is that 100,000 viewers? That so bad and Carter matter an 37,600 view YouTube recapper of many shows is averting this. Wow he may be the only reason this show gets an season 2.