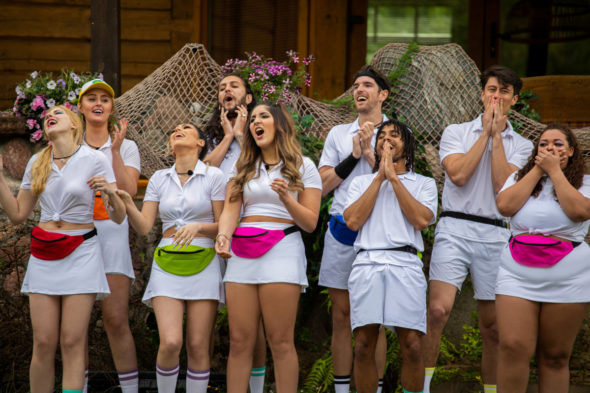 It looks like Handyman Bruce is out of work. The CW network has pulled the Killer Camp series from the schedule after just two episodes. Has it been cancelled?

A reality series with a scary whodunnit twist, the Killer Camp TV show is an homage to campy horror flicks from the 1980s. Camp Counselor Bobby (host Bobby Mair) welcomes a mix of 13 unlucky American and British campers to Camp Pleasant. They’re ready for fun but are quickly reminded that not everyone will survive. After all, one of them is a killer who will engage the help of homicidal Handyman Bruce to kill their new friends, one by one. The campmates are immediately thrown into several challenges to try to bank cash for their prize fund or, to win immunity. All the while, the killer among them tries to sabotage the games. As campers are “killed” by Bruce in humorous and grisly ways, the survivors work to expose the killer among them for a piece of the $50,000 cash prize.

After two installments, the second season of Killer Camp averages a 0.04 rating in the 18-49 demographic and 160,000 viewers in the live+same day ratings (includes all DVR playback through 3:00 AM). Compared to season one, that’s down by 69% in the demo and down by 63% in viewership in the live+same day ratings (including DVR playback through 3:00 AM). While these numbers don’t include further delayed or streaming viewing, they are a very good indicator of how a show is performing, especially when compared to others on the same channel.

Killer Camp is the lowest-rated show on the network’s schedule and it’s now been pulled. The CW programmers are filling the timeslot with reruns of Masters of Illusion for the next two weeks.

Word is that the horror reality series may return to The CW’s schedule at some point in the future. Given that the network is now programing Saturday night timeslots, that evening might be a possibility. In any case, it’s hard to imagine that leftover episodes would draw any better ratings or that the show would warrant a third season.

What do you think? Have you watched the Killer Camp TV show on The CW? Are you disappointed that it’s been pulled from the schedule? Would like to see the remaining episodes or a third season?

Keep the show. I love it, and it is more challenging than other similar shows.

I love this show, I love Bobby – it is so funny! It probably only got a low rating because no one who watched the first season new it came back for a second season. Plus there are a million well watched shows on Sundays, I think that it was on Tuesday nights and that is why it did so well.