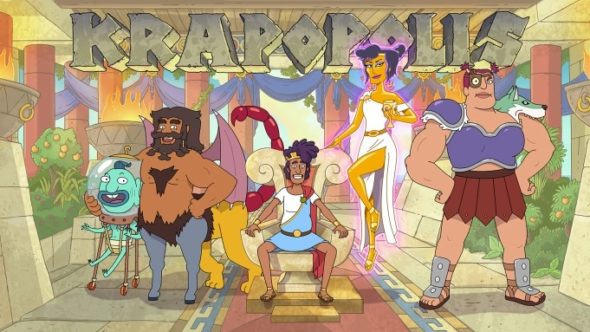 Krapopolis is coming to FOX in the upcoming 2022-23 season and the network has set a special November 27th preview date. The rest of the season will begin airing in early 2023. Starring Hannah Waddingham, Richard Ayoade, Matt Berry, Pam Murphy, and Duncan Trussell, the animated series from Dan Harmon is set in ancient times and revolves around the mortal son of a goddess and his extended family.

Highly anticipated new animated series from Dan Harmon (co-creator of “Rick and Morty”), KRAPOPOLIS centers on a flawed family of humans, gods and monsters that tries to run one of the world’s first cities without killing each other.

In the series, Richard Ayoade (“The IT Crowd”), voices “Tyrannis”, the mortal son of a goddess. He’s the benevolent King of Krapopolis trying to make do in a city that lives up to its name. Hannah Waddingham (“Ted Lasso”), plays “Deliria,” Tyrannis’ mother, goddess of self-destruction and questionable choices.

Within her extended Olympian family – forged in patricide and infidelity – she’s known as the trashy one. Matt Berry (“What We Do in The Shadows”) is “Shlub,” Tyrannis’ father, a mantitaur (half centaur [horse + human], half manticore [lion + human + scorpion]). He is oversexed and underemployed, claims to be an artist and has literally never paid for anything, in any sense of that word, for his entire life.

Check out the preview for Krapopolis below.

What do you think? Do you plan to check out Krapopolis on FOX in November?