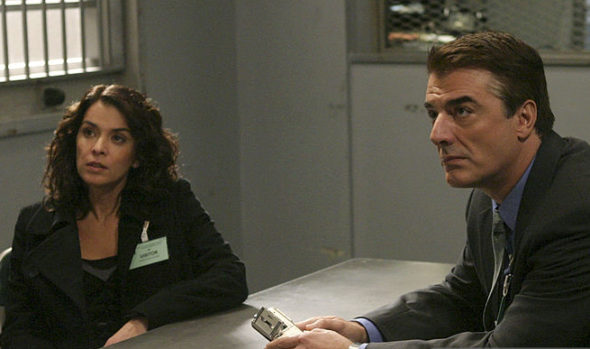 Annabella Sciorra is returning to the world of Law & Order on NBC. The actress appeared in the fifth season of Law & Order: Criminal Intent back in 2005 and 2006 and her Carolyn Barek character will pop up on Law & Order: SVU, which is currently in its 22nd season.

Per TV Line, Det. Barek will join forces with Olivia Benson (Mariska Hargitay) on a case. The following was revealed about the episode:

“All these years later, Barek is now a lieutenant in the Bronx Special Victims Unit. She’ll show up on SVU when she forms a join task force with Capt. Olivia Benson and the Manhattan SVU to hunt down a series rapist who has struck in both boroughs.”

Viewers will see the episode featuring Sciorra air on the network at some point in February.

Sciorra (above, left) is not the only face returning to the world of Law & Order. Christopher Meloni is still reprising his role for a new NBC addition to the Law & Order franchise. He joined a table read for an episode of Law & Order: SVU which will bring his character back to the franchise.

What do you think? Are you excited to see the return of Sciorra on the Law & Order: SVU TV show on NBC?

I liked Criminal Intent but SVU has been awful since the old Captain left the show. May I just point out Erbe, and Sciorra mostly stand, and watch the lead male detective practically solve the case on their own. They’re the Watsons, and for whatever reason they are always lifeless acting, very cold, and boring. Why is it exciting to see her reprise this character? I wouldn’t be excited about Erbe coming back either. Now D’Onofrio acts the same way but his character impresses you with his intellect, they never make their women partners highly intelligent on Criminal Intent unlike… Read more »

I am thrilled beyond happy to see Annabella on SVU, I’ve been a huge fan of hers for decades.

I loved Carolyn Barek and was disappointed that she was written out of the show. I am stoked that she’s going to be a part of Olivia Benson’s world.

So, so excited 2 c familiar faces and characters especially on SVU!