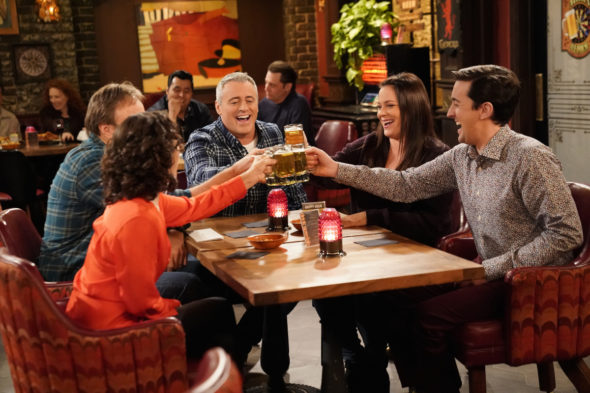 Man with a Plan and Broke have their premiere date set. Both shows will arrive this spring on CBS after The Unicorn and Carol’s Second Act finish out their seasons on the network. Broke is a new series, which stars Jaime Camil and Pauley Perrette.

CBS revealed more details in a press release. Check that out below.

BROKE stars Jaime Camil and Pauley Perrette in a comedy about a single suburban mother (Perrette) who’s shocked when her estranged sister, her sister’s outrageously wealthy, big-hearted, Latin husband (Camil), and her husband’s fiercely loyal assistant/driver/friend land on her doorstep in need of a place to live after the couple’s money dries up. Though class differences may separate the women, and the size of the house and the number of people living in it will test the limits of family ties, the familiar bond of sisterhood might be the catalyst they need to restore their relationship. Natasha Leggero, Izzy Diaz and Antonio Corbo also star.”

What do you think? Are you excited for the return of Man with a Plan? Do you plan to watch Broke?

I loved man with a plan and am looking forward to its return April 2nd. The family issues are believable.Matt LeBlanc and cast members are terrific.

I am very happy Man With a Plan is coming back. Great show.

Can’t wait for the season premiere I love this show

I am so excited to watch Man with a Plan, Season 4. I watch the reruns over and over. Everyone on the show is hilarious. I hope to see Diana Maria Riva and Swoosie Kurtz on the show this year.

Looking forward to Man With a Plan! I enjoy the show! Thank goodness for DVR. Wish network would stop moving it around the schedule.

Excited to check out Broke!! My family and I plan on watching!

yes to one,meh to the other

ABOUT TIME man with a plan comes back, funnier than the unicorn by MILES, broke looks sad, and unfunny to me, almost forced , BUT ill give it 2-3 episodes before making any real decisions about continuing to watch or not, th previews dont look good for broke though.

Yes, I’m very happy Man with a Plan is returning!!

I LOVE MAN WITH A PLAN! I hope the whole cast will be there. I do miss the youngest daughter’s teacher though.

Yes I’m excited to see Man with a plan return! I thought it had been canceled.

I LOVE MAN WITH A PLAN The talk about family is hilarious. The characters are fun to hear their points of view !!!

Finally news it’s coming back. 🙂 We are really excited to see this show coming back. We thought it was cancelled. So glad it’s not. 🙂