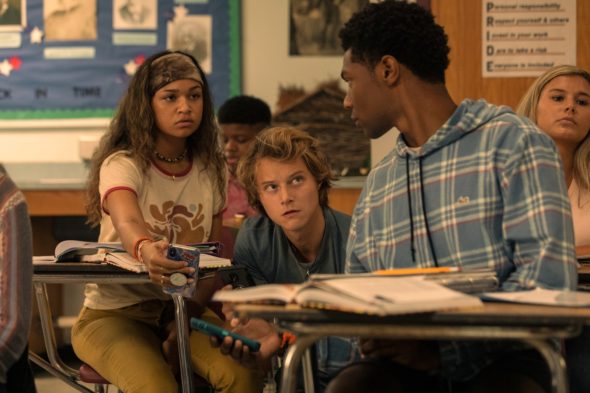 Will this season draw in a treasure-trove of viewers to Netflix? Has the Outer Banks TV show been cancelled or renewed for a third season? The television vulture is watching all the latest cancellation and renewal news, so this page is the place to track the status of Outer Banks, season three. Bookmark it, or subscribe for the latest updates. Remember, the television vulture is watching your shows. Are you?

Streaming on the Netflix subscription service, the Outer Banks TV show was created by Josh Pate, Jonas Pate, and Shannon Burke. It stars Chase Stokes, Madelyn Cline, Madison Bailey, Jonathan Daviss, Rudy Pankow, Austin North, Charles Esten, and Drew Starkey. A coming-of-age story, the series follows a tight-knit group of working-class local teens (known as the Pogues) in the Outer Banks of North Carolina. They are often at odds with the Kooks, aka the wealthy seasonal residents. In season two, with a fortune in gold at stake and their futures on the line, the Pogues rush headlong into danger to hunt for a legendary treasure linked to the disappearance of the father of John B. (Stokes).

Unless they decide to publicize viewership, it is difficult to predict whether Netflix will cancel or renew Outer Banks for season three. Since Netflix isn’t ad-supported, it can take a chance on series it believes in, but sooner or later it comes down to production costs, versus viewership numbers. Generally speaking, Netflix TV shows which are going to be renewed are usually picked up within a month or so of the series or season premiere. It took Outer Banks three months to score its second season renewal but the pandemic was likely a factor. I think this show has a solid chance of being renewed for a third season but I’ll update this page with breaking developments. Subscribe for free alerts on Outer Banks cancellation or renewal news.

12/8/21 update: Outer Banks has been renewed for a third season.

What do you think? Are you glad that the Outer Banks TV show has been renewed for a third season? How would you feel if Netflix had cancelled this TV series, instead?

Love the series! Hope they keep it going!

Outer Banks is a compelling binge watch, Episode endings with great suspense. The filming locale is exceptional, the SC Low Country and Charleston settings are beautiful. Worth watching

This show is so addicting please keep it going. Living in the real outer banks, I love it.

Loved this series would hate to see it go.