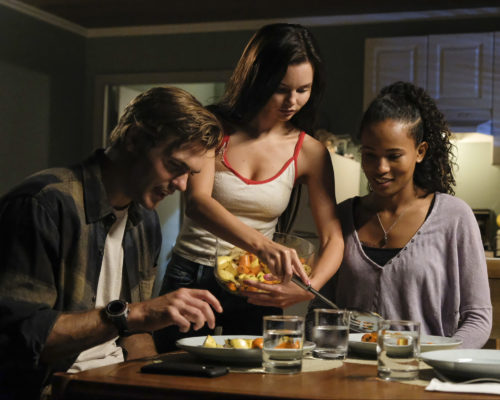 How deep will the mysteries run? Has the Siren TV show been cancelled or renewed for a fourth season on Freeform? The television vulture is watching all the latest cancellation and renewal news, so this page is the place to track the status of Siren, season four. Bookmark it, or subscribe for the latest updates. Remember, the television vulture is watching your shows. Are you?

Airing on the Freeform cable channel, Siren stars Eline Powell, Alex Roe, Fola Evans-Akingbola, Ian Verdun and Rena Owen. The TV show is set in the small fishing village of Bristol Cove which is known for its legend of once being home to mermaids. When the legend proves to be true, the battle between man and sea takes a very vicious turn as these predatory beings return to reclaim their right to the ocean. In season three, Ben’s shocking decision to let the reporter die has ripple effects in his relationship with Maddie and Ryn. Meanwhile, a dangerous, sophisticated new mermaid arrives in Bristol Cove, challenging Ryn’s leadership and igniting an epic undersea battle between rival tribes. All of this is complicated by the fact that Ryn’s baby, now being carried by a surrogate, must be protected at all costs.

The third season of Siren averaged a 0.11 rating in the 18-49 demographic and 408,000 viewers. Compared to season two, that’s down by 26% in the demo and down by 14% in viewership. Find out how Siren stacks up against other Freeform TV shows.

Will Freeform cancel or renew Siren for season four? The series has been one of Freeform’s highest-rated series so I believe it will be renewed. I’ll update this page with breaking developments. Subscribe for free alerts on Siren cancellation or renewal news.

8/6/20 update: Siren has been canceled after three seasons on Freeform.

What do you think? Were you hoping that the Siren TV show would be renewed for a fourth season? Are you sorry that Freeform cancelled this TV series, instead?

This is the best show ever I would be very upset if they didn’t renew it! Please renew this show it is my favorite one out!

Please make a season 4, i love the show, i love the mermaids. Hoping for season 4 from the netherlands

I would be so upset this is definitely by far the best TV show I have ever watched I hope there are many more seasons to come and a lot closer together I can’t wait to see what happens with Ben and Maddie and as for Ryn I love her. I am begging please do not get rid of this show please keep recording thank you

Love the show…I hope there will be a season 4!!!

I’m not a si fi type but this is so interestly. Love the drama. Sucked me in very first show!!! We love all about it. Please do a fourth season

Pleas do a season 4 of Siren!!! we are old folks really love sirens!!

Please renew! people need to seek deeper into the message ! You need to watch it from the beginning to understand it love it so much. Ill protest if it doesnt renew.

I loved this show of Siren! Please, please say it will be renewed! The last I heard it was due to come back on this year! What happened? I have been so looking forward to it!

I love this show! You need to expand your demographics! Im 62 and know a lot of viewers are older than 40!

Bob B.
Reply to  Cathy Rauch

In my late 60’s – love the show and have many friends that love it………….This show could run for another DECADE or more! Better than most of the GARBAGE that repeats over and over – – – give these GREAT SHOWS more than a few seasons………and perhaps RATE THEM ANOTHER WAY – this show IS A WINNER !

61 here and I LOVE the show..a year later and still no word of a return of Siren 🙁

I really like the show, but it’s sort of a paperback book type of like. I’m ready for a really good ending that ties up all the questions and is really happy for all. I like happy endings.