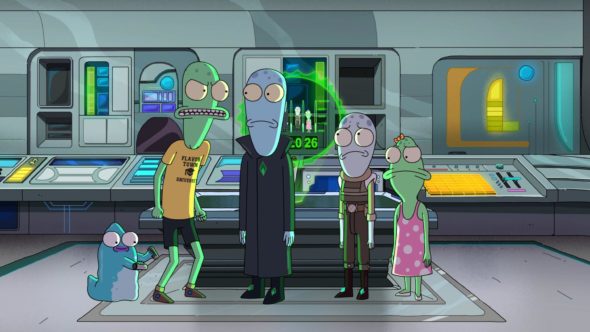 Solar Opposites fans are waiting for season four of the Hulu series, but we already know there will also be a fifth season. Hulu has renewed the animated sci-fi comedy series and the announcement was made at New York Comic Con. Justin Roiland and Mike McMahan are behind the animated series which follows a group of aliens who crash land on Earth and are forced to live there.

Deadline revealed the following about the series:

Solar Opposites centers around a team of four aliens who are evenly split on whether Earth is awful or awesome. Korvo (Justin Roiland) and Yumyulack (Sean Giambrone) only see the pollution, crass consumerism, and human frailty while Terry (Thomas Middleditch) and Jesse (Mary Mack) love TV, junk food and fun stuff.

A Sinister Halloween Scary Opposites Solar Special was released earlier this week. Season four of the series will return with 12 episodes at some point in 2023. It is not known when season five will arrive.

What do you think? Are you happy that Hulu has renewed Solar Opposites for a fifth season?