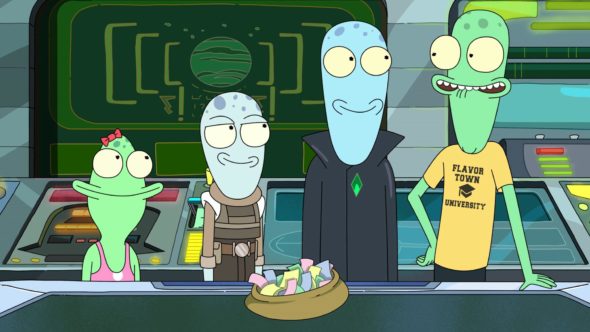 What’s next for the team? Has the Solar Opposites TV show been cancelled or renewed for a third season on Hulu? The television vulture is watching all the latest cancellation and renewal news, so this page is the place to track the status of Solar Opposites, season three. Bookmark it, or subscribe for the latest updates. Remember, the television vulture is watching your shows. Are you?

Streaming on the Hulu subscription service, the animated Solar Opposites TV show stars Justin Roiland, Thomas Middleditch, Sean Giambrone, and Mary Mack. The story centers around a team of four aliens who have escaped their exploding homeworld, only to crash land into a move-in-ready home in suburban America. They are evenly split on whether Earth is awful or awesome. Korvo (Roiland) and Yumyulack (Giambroni) only see the pollution, crass consumerism, and human frailty. Meanwhile, Terry (Middleditch) and Jesse (Mack) love humans and all their TV, junk food, and fun stuff. The aliens’ mission is to protect the Pupa, a living supercomputer that will one day evolve into its true form, consume them, and terraform the Earth.

It’s typically difficult to predict whether Hulu will cancel or renew a show like Solar Opposites for season three. In this case, we know the series has already been renewed for a third season of 12 episodes. I’ll keep my ears open and an eye out for news, and will update this page with breaking developments. Subscribe for free alerts on Solar Opposites cancellation or renewal news.

What do you think? Are you glad that the Solar Opposites TV show has been renewed for a third season? How would you feel if Hulu had cancelled this TV series, instead?