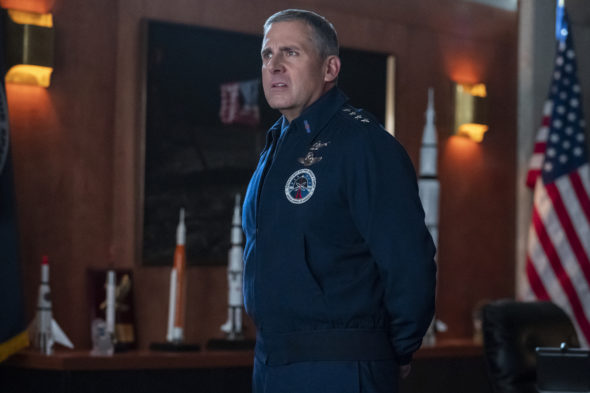 Steve Carell is heading back to space.  Netflix has renewed the Space Force TV series for a second season but will get a creative revamp. It has not been disclosed when season two will be released but filming will begin next year.

A workplace comedy series, Space Force stars Carell, John Malkovich, Diana Silvers, Tawny Newsome, Ben Schwartz with co-stars Lisa Kudrow, Jimmy O. Yang, Noah Emmerich, Alex Sparrow, and Don Lake.  The story follows a decorated pilot with dreams of running the Air Force, four-star general Mark R. Naird (Carell), He’s thrown for a loop when he finds himself tapped to lead the newly formed sixth branch of the US Armed Forces — Space Force. Skeptical but dedicated, Mark uproots his family and moves to a remote base in Colorado where he and a colorful team of scientists and “Spacemen” are tasked by the White House with getting American boots on the moon (again) in a hurry and achieving total space dominance.

The series was created by Carell and Greg Daniels (The Office) and launched in May. The streamer typically makes decisions on shows’ futures within a couple of months so it would seem that Space Force wasn’t as big of a success as Netflix had hoped.

To save on costs, production is being moved from Los Angeles to Vancouver for season two. Norm Hiscock (Brooklyn Nine-Nine, Parks and Recreation), a frequent collaborator with Daniels, has also joined the series as co-showrunner with Daniels. According to THR, the hope is that season two will allow the show to find its footing creatively, just as The Office did in subsequent seasons.

The Office is one of Netflix’s most-viewed series which led to the streaming service pursuing Space Force with Carrell as a lead. The former NBC comedy series moves to Peacock in 2021.

It's official! Space Force has been renewed for Season 2! pic.twitter.com/n30qOnB8NX

What do you think? Have you watched the first season of Space Force on Netflix? Do you plan to watch the second season?

Awesome. I have just watched the first season and over the moon so to speak that they are going to make a second season. Looking forward to seeing the excellent performance of both Steve Carrell and John Malkovich

I’m so stinkin happy this show is renewed. I was hesitant to watch, afraid it would be just too absurd, or worse that I would just be watching the headlines play out in multi-camera format and even after the first episode I wasn’t entirely convinced I would continue watching. By the end of the second episode I was convinced. It was absurd, but just the right amount of absurd and all the right kinds of hilarious.

This is hilarious, especially when you watch it a second time. Can’t wait for season 2, Steve and John are hilarious, we need more Lisa! Do we know if the change in direction at the WH will effect the space force budget lol

I loved the first season. The stupidity was hilarious. Steve and Jon were the best. It also exposed the worst President in American history. Cannot wait for Season 2!

Good news for netflix love Steve Carroll so happy continue some people commenting about how awful this show is. Made laugh so hard on streaming shows ever.

I tried watching this. Couldn’t get past the second episode. ugh

This garbage was renewed, and Away was cancelled. Netflix sure was wrong on both.