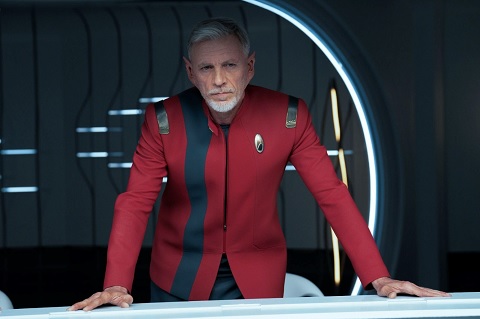 Star Trek: Discovery is returning for its fifth season in 2023, and Paramount+ has released the first photos and a teaser for the new episodes. The photos show off new cast additions Callum Keith Rennie (above), Eve Harlow, and Elias Toufexis. Sonequa Martin-Green, Doug Jones, Anthony Rapp, Mary Wiseman, Wilson Cruz, David Ajala, and Blu del Barrio star in the sci-fi series which follows the crew of the USS Discovery.

Callum Keith Rennie joins the cast in a series regular role as Rayner. Rayner is a gruff, smart Starfleet Captain who holds a clear line between commander and crew – he leads, they follow. Rayner’s all about the mission, whatever it may be, and he doesn’t do niceties along the way; his feeling is, you get the job done and apologize later. He has a storied track record of wartime success, but in times of peace he struggles. Collaboration is not his strong suit. That said, if it serves the greater good he’s willing to learn … but it won’t be easy.

Moll is a former courier turned outlaw, who is highly intelligent and dangerous, with an impressive strategic mind and a sharp wit. She goes into every situation with a clear plan and stays focused and clear-headed on her goal, even when things go awry. She’s not intimidated by Captain Burnham or the crew of the U.S.S. Discovery, and will face down anyone who stands in her way in order to get what she wants.

L’ak is a former courier turned outlaw, who is tough, impulsive and fiercely protective of his beloved partner, Moll. So long as he knows she’s safe, he doesn’t care about collateral damage or its consequences – a perspective that makes him very dangerous at times and will put him on the opposite side of Captain Burnham and the crew of the U.S.S. Discovery when they come into conflict.

In season five, Captain Burnham and the crew of the U.S.S. Discovery uncover a mystery that sends them on an epic adventure across the galaxy to find an ancient power whose very existence has been deliberately hidden for centuries. But there are others on the hunt as well … dangerous foes who are desperate to claim the prize for themselves and will stop at nothing to get it.

Check out the teaser trailer and another photo from Star Trek: Discovery season five below. 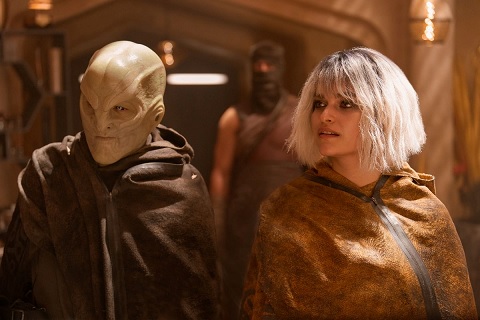 Elias Toufexis and Eve Harlow as L’ak and Moll

What do you think? Are you looking forward to the fifth season of Star Trek: Discovery?

I think Discovery has jumped the shark. Burnham is just too omnipotent. No other character even matters. And it bothers me that all of the spin-offs of the original are making the original series seem not to matter.

Except for Season 2 with Anson Mount, I have not liked this show since the beginning. Didn’t watch it last season, won’t miss it. “Strange New Worlds” is great and I’m looking forward to this next season of real Trek.