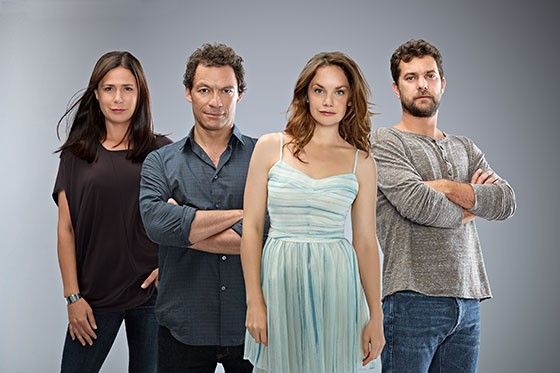 TV show description:
This provocative dramatic series explores the emotional effects of an extramarital relationship on all involved.

Noah Solloway (Dominic West) is a writer and schoolteacher who is happily married to Helen. They live in Brooklyn with their four children and are beholden to Helen’s wealthy father, a famous novelist, for their spacious brownstone. It’s something that Noah resents and wears on him. Noah’s first novel was recently published to mixed reviews. He is vacationing with his family at his in-laws’ estate in Montauk for the summer, where Noah hopes to write a more successful follow-up.

Helen (Maura Tierney) is Noah’s loving wife and a deft manager of their busy lives. She still loves her husband after all these years. Her father is a renowned novelist but that success came at the expense of his family. Helen has high hopes for Noah’s own writing career but is wary of repeating the mistakes of her parents.

Alison Lockhart (Ruth Wilson) is a Montauk native who works as a waitress at a local diner. She’s married to Cole, the son of a local landowning family. They’re struggling to recover from a tragic loss and their relationship is in repair.

Cole (Joshua Jackson) is Alison’s husband, the prodigal son of a large, boisterous family who has owned a ranch in Montauk for generations. He is equally devastated by the horrible loss he and Alison have suffered, but he finds comfort in his responsibilities at the ranch and the loving support of his family.

Noah and Alison have a chance encounter and each proves to be a tempting distraction to the emotional turmoil in their lives.

What do you think? Do you like The Affair TV show? Do you think it should have ended or been renewed for a sixth season on Showtime?

I am always looking forward to watching The Affair series. I hope that they will renew the show. It is very different and it keeps you guessing on what will happen next. I am a Fan of the show.

I love the affair please don’t let it end

Please, create. Another, story Line. For. All of. The. Characters,

In in Love with. Cole; Helen can be Annoying. ,she is a version of Her Controlling Mother, I will miss Allison’s. Character, I Wanted to See more of The school Principal And Noah’s. Relationship, The show is. Well written, well. Thought. Out. Very. Good.

I love the show The Affair. I hope they do not cancel after season 5!

I have really enjoyed “The Affair” please continue to renew it.

Please don’t cancel it. You can even cast new players in this drama or an extension of these players.

Hope it is not cancelled.

This should continue. Love this show

Please keep this one going! It’s very complex and intriguing. Great story lines. Nothing like it!

Please renew the Affair beyond season 5 its very good