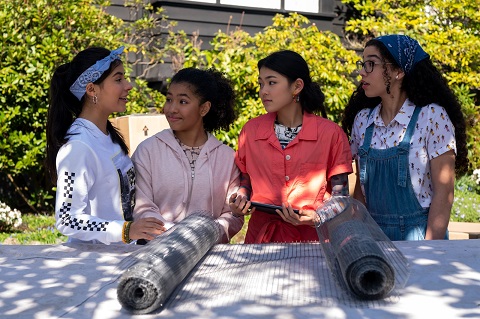 Netflix revealed more about The Baby-Sitters Club season two in a press release.

“Based on the best-selling book series by Ann M. Martin, The Baby-Sitters Club is a contemporary dramedy that follows the friendship and adventures of seven friends as they start their own babysitting business in Stoneybrook, Connecticut. As demand for their club continues to grow, founders Kristy Thomas, Mary-Anne Spier, Claudia Kishi, Stacey McGill, and Dawn Schafer have now welcomed Mallory Pike and Jessi Ramsey to their ranks. With the new school year comes booming business, new relationships, personal journeys, and important lessons, but through it all the club is there for each other every step of the way.”

Rachel Shukert, executive producer and series creator said the following about the return of the series:

“In Season 2, we really get to see a maturation of the club, and of the girls. There are two new members, they’re all a year older and have more experience running a business, deeper friendships and are growing into a deeper understanding of themselves as people. We also wanted to continue exploring themes that allow all young viewers to see themselves represented on screen, while also dealing obliquely with many of the things we’ve all been through in the past year: loss, change, responsibility, and trying to find joy and meaning in unexpected places. I’m so excited for everyone to be back in Stoneybrook and back in business!”

What do you think? Are you excited about the return of The Baby-Sitters Club to Netflix this fall?

Another CC show nobody cares…