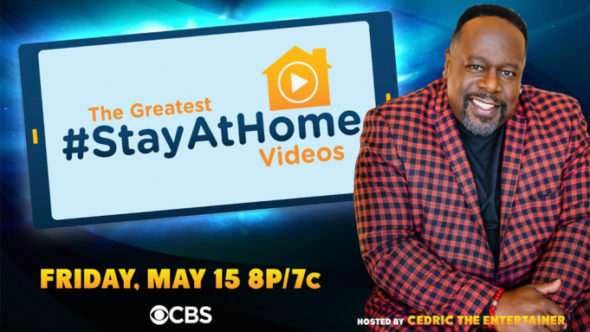 The Greatest #AtHome Videos TV series is hosted by Cedric the Entertainer. The show showcases home videos that reflect the creativity, humor, and humanity of people in their own domiciles. With sports, concerts and “date night” outings on indefinite hold, people have taken to amusing themselves through unique, often hilarious, social media posts. For each video selected as part of the show, CBS gives a monetary donation toward a qualifying charity of the participants’ choice. Guests include Arnold Schwarzenegger, Tracee Ellis Ross, Luke Bryan, Kylie Jenner, Smokey Robinson, and Tony Hawk.

11/7 update: You can see the latest night’s ratings in context.

Note: Because CBS has broken the first season up between the 2019-20 and 2020-21 broadcast seasons, the ratings are presented here in two different charts. The averages are included on the respective season charts (2019-20 and 2020-21).

What do you think? Do you like The Greatest #AtHome Videos TV series on CBS? Should it be cancelled or renewed for a second season?

*6/15/21 update: The Greatest #AtHome Videos has been renewed for a second season on CBS.