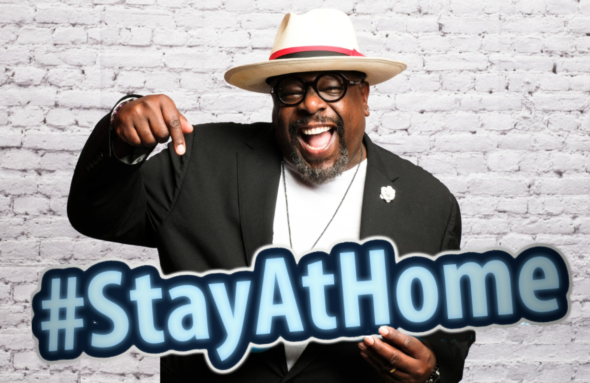 Would people stay home for this show if there wasn’t a pandemic? Has The Greatest #AtHome Videos TV show been cancelled or renewed for a second season on CBS? The television vulture is watching all the latest cancellation and renewal news, so this page is the place to track the status of The Greatest #AtHome Videos, season two. Bookmark it, or subscribe for the latest updates. Remember, the television vulture is watching your shows. Are you?

Airing on the CBS television network, The Greatest #AtHome Videos TV series is hosted by Cedric the Entertainer. The series showcases home videos that reflect the creativity, humor, and humanity of people in their own living spaces. With sports, concerts and “date night” outings on indefinite hold, people have taken to amusing themselves through unique, often hilarious, social media posts. For each video selected as part of the show, CBS gives a monetary donation toward a qualifying charity of the participants’ choice. Guests include Arnold Schwarzenegger, Tracee Ellis Ross, Luke Bryan, Kylie Jenner, Smokey Robinson, and Tony Hawk.

Will CBS cancel or renew The Greatest #AtHome Videos for season two? This show was conceived in response to the COVID-19 pandemic so it feels like a given that it will have a limited time on the network. Still, home video shows have done well in the past (America’s Funniest Home Videos has been on the air for 30 years) and the format is cheap to produce so, there’s a chance it could have a life post-pandemic. I’ll update this page with breaking developments. Subscribe for free alerts on The Greatest #AtHome Videos cancellation or renewal news.

6/15/21 update: The Greatest #AtHome Videos has been renewed for a second season on CBS.

What do you think? Are you glad The Greatest #AtHome Videos TV show has been renewed for a second season? How would you feel if CBS had cancelled this TV series, instead?

We make sure to be ready to watc this show ever week with out fail!! Please RENEW!!!!!

LOL, there IS a pandemic & I can’t imagine anyone wanting to watch this program. Feel free to cancel it ASAP. It’s awful!!!! Hey CBS, who ever is picking out your shows lately needs to be fired.