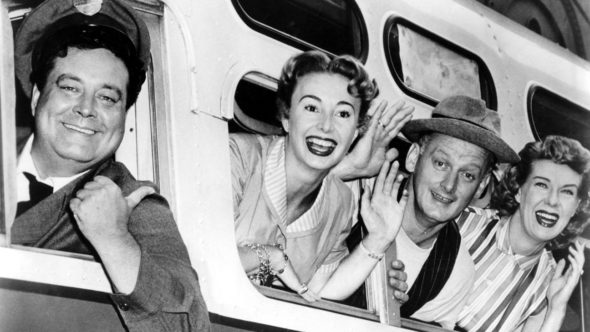 The Honeymooners may be getting a reboot. A reimagining of the classic sitcom, a female as the lead, is in the works at CBS with Damon Wayans Jr. A cast is not yet attached to the potential series.

“Written by Black-ish and Mixed-ish alum Lindsey Shockley, The Honeymooners is described as a bold, female-fronted reimagining of the iconic working-class comedy centered around new wife, Ruth, and her husband, Alex, who are determined to have a marriage where they are true equals in every way. But what happens when a marriage has two heads of household? Are they co-heads? Or no head at all?”

A little over five years ago, CBS considered a modern take reboot of The Honeymooners with Bob Kushell writing the pilot. Kushell was also behind ABC’s The Muppets series. The project didn’t move forward.

The original series, which stars Jackie Gleason, Audrey Meadows, Art Carney, and Joyce Randolph, aired from 1955 to 1956 on CBS.  The series began as a sketch on the DuMont network’s Cavalcade of Stars in 1951.

What do you think? Would you watch a Honeymooners reboot if it landed on CBS?

Don’t mess with perfection. No reboot of this could ever be the same or as good. This world has loss the innocence of shows like that.

How is this a reboot? Alex and Ruth instead of Ralph and Alice. Will Alex be a bus driver like Ralph? Will the character who replaced Ed Norton work in the sewer? It has already been established that Alex and Ruth will not have the same relationship that Ralph and Alice had. This sounds to me like it is more about using the name of the series more than it is a reboot.

Let it be!! Isn’t anyone creative enough to come up with a future classic on their own?!

The original show was way before my time and even I’m against a reboot. Just leave stuff alone.

Geez, does everything have to be rebooted, reimagined, remade etc.? Doesn’t anyone
in Hollywood have anything that even remotely resembles
a new idea/concept?
Leave this classic alone!!

The sun will rise in the north
Reply to  Jennifer

Welcome to the New World were no one creates anything but only remix stuff that exists ready. Less value less money less talent equals more money for the networks. There’s no such thing as CreativiTea anymore it’s all about making money quick and dirty. It’s a show last two years good three years yeah but these days TV shows don’t last.

I loved the original. No way would I watch a reboot!!