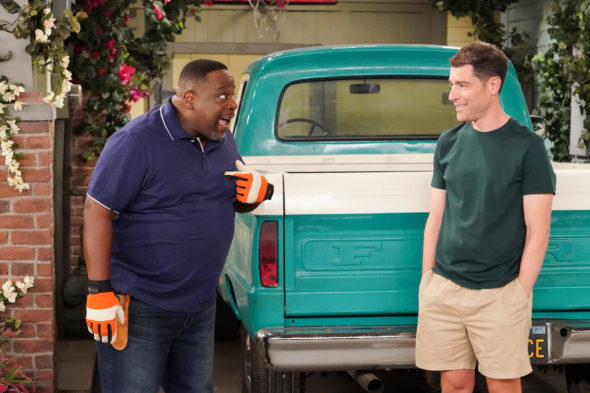 Dave and Calvin are going to have to keep working things out during the 2023-24 television season. CBS has given The Neighborhood series an early renewal for season six.

Airing on Monday nights, the fifth season of The Neighborhood averages a 0.52 rating in the 18-49 demographic and 5.28 million viewers. Compared to season four, that’s down by 16% in the demo and down by 5% in viewership in the live+same day ratings (including DVR playback through 3:00 AM). The show picks up about 22% more viewers in the live+7 day ratings.

This season, The Neighborhood reportedly ranks as the #3 comedy series on Paramount+, based on total minutes viewed with full episode streaming up +60% year over year (Paramount+ and CBS TVE).

“The Neighborhood has become a hit by not only delivering laughs but by telling stories of cultural impact,” said Amy Reisenbach, president of CBS Entertainment. “From gentrification to Black Lives Matter, to addiction and pregnancy loss, the incredible writers and this amazing cast push boundaries and endlessly entertain us. As they film their 100th episode this week, directed by Cedric the Entertainer, we are thrilled to announce that we are welcoming this outstanding series back for a sixth season.”

The cast and crew were notified of the renewal on set. Here’s a video:

What do you think? Have you kept up with The Neighborhood TV series on CBS? Are you glad that this comedy has been renewed for a sixth season? Did you think that this CBS series might be cancelled?

People don’t watch is east to be. I am not people that watch the stuff but not close to where it used to be.

Great Job Glad You Will Be Coming Back Next Season