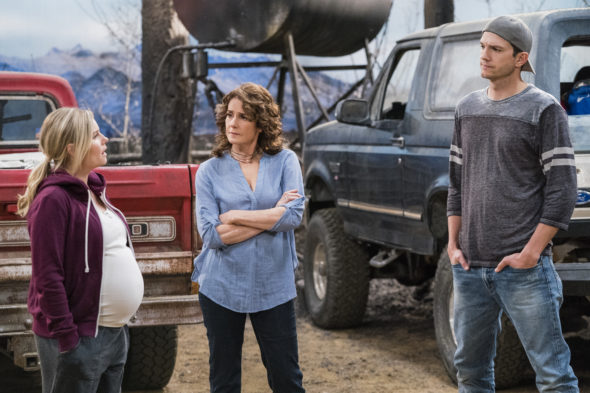 How do parts five and six of The Ranch TV show measure up on Netflix? As we all know, the Nielsen ratings typically play a big role in determining whether TV shows are cancelled or renewed. Netflix and other streaming platforms, however, collect their own data. If you’ve been watching this TV series, we’d love to know how you feel about the season three episodes The Ranch. We invite you to rate them for us here.

A Netflix comedy series, the third season of The Ranch (which is called parts five and six) stars Ashton Kutcher, Danny Masterson, Debra Winger, Sam Elliott, and Elisha Cuthbert. The show follows the Bennett family of the fictional Iron River Ranch in the small town of Garrison, Colorado. Masterson was written out with part five following multiple sexual assault allegations made against him.

What do you think? Which season three episodes of The Ranch TV series do you rate as wonderful, terrible, or somewhere between? Should Netflix have renewed The Ranch for a fourth season (parts seven and eight)? Don’t forget to vote, and share your thoughts, below.

Just got Netflix subscription for the family for Christmas and I literally binge watched Seasons 1-3. I absolutely love the Ranch! Please continue to renew. Great storyline, fantastic cast. The show has heart and humor. Looking forward to another season.

Bring back the Rooster.

Here is how to do it, if there are any script writers from the show reading this;

Rooster has contacted Mary and she knows he is alive, that is why she has turned to drugs and is stealing from Maggie’s bar. She is sending the money to Rooster who is still in hiding. Write in Roosters return in the next season and get back to the laughs that are missing this season.

Danny Masterson is not guilty of the 20 year old charges. Man up and do the right thing.

the show sucks without rooster. bring him back. I am done with show