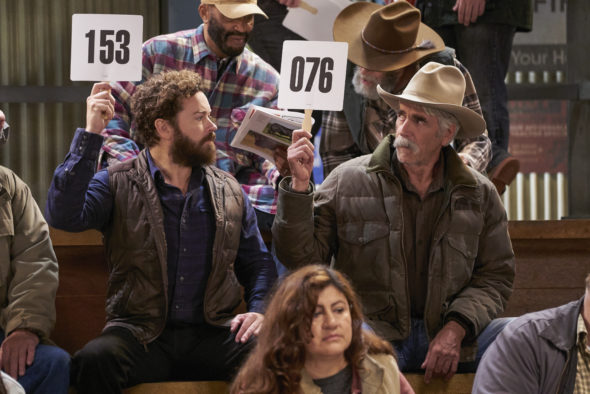 Is Netflix being hypocritical? The Huffington Post reports new episodes of The Ranch have begun production despite multiple accusations of rape against star Danny Masterson.

Masterson plays Jameson “Rooster” Bennett on the comedy, which also features Ashton Kutcher, Sam Elliott, Debra Winger, and Elisha Cuthbert. Netflix renewed the series for a third season back in July. Season 2B is slated to premiere on December 15th.

Last week, HuffPo reported at least four women have accused Masterson of rape and Los Angeles County is currently investigating the claims. Around the same time, Netflix cancelled House of Cards and cut ties with star Kevin Spacey because of sexual assault allegations.

However, Netflix has not taken action against Masterson as they have done for Spacey. Instead, the streaming service has released a brief statement saying they are aware of the situation and The Ranch will continue filming:

We are aware of the allegations and the subsequent investigation, and will respond if developments occur.”

What do you think? Do you watch The Ranch? How do you think Netflix should respond to these allegations?

“Ranch” should continue. After all “Rooster” has been killed in the series.

Plz keep filming.. At this point they r only allegations!!!
BRING BCK TO OUR COUNTRY

Wow when did networks become judge and jury? Do not fire Danny!! This show is great and he is one of the main reasons!

I thoroughly enjoy watching The Ranch and hope it continues without Danny Masterson.

I think innocent until proven guilty. Why ruin a good show over alledged conduct?

I watch it and love this show. It’s clean and funny and refreshing. Firing someone for allegations could ruin their life … for nothing! Innocent until proven guilty.

Kevin Spacey said he did it. Danny Masterson didn’t. Leave judgement to the judicial system . Might cancel Netflix if they fire on unsubstantiated here say.

Keep the show going! It’s funny how these women never go after these men for rape until after the men become famous! And years later if it happened in 2004 they should’ve brought charges in 2004 there should be a limit on that crap

I watch and love this show and will continue watching it !! Not much on tv that’s enjoyable!! It’s all shooting and killing shows Please don’t cancel this show !!

Until he is proven guilty, continue the series. Innocent until proven guilty. To much of this happening right now, makes me skeptical of any woman saying this. A famous person doesn’t need to rape a woman, when there are 100’s in line wanting to be with him

I am loving the show. I don’t believe rumors. I like facts, proof. If Netflix cuts the show based on just allegations I will stop watching Netflix. I can watch the shows I like on other outlets.

Guilty until proven innocent in mainstream media these days.

This is America, people here are presumed innocent until proven otherwise. Hollywood is always quick to pass judgement. Props to Netflix for handling this situation diplomatically and not throwing Danny Masterson to the wolves. If this show had been on one of the big three networks the show would have been canceled as soon as the word rape was used.

I watch the ranch. I like it. I think everyone should wait until the investigation is finished and or charges are acted upon by the police. Seems like the “innocent until proven guilty” has gone by the wayside in America. Unless a person confesses or is convicted everyone should just keep their mouths shut and opinions to themselves.

I’m sure you let your opinion be known about stuff just like others since you’re on here commenting a lot.

people in Hollywood get away with a lot of things and cover them up. He’s a long time member of Scientology so. so even if he did do it don’t mean he will be convicted enjoy the show