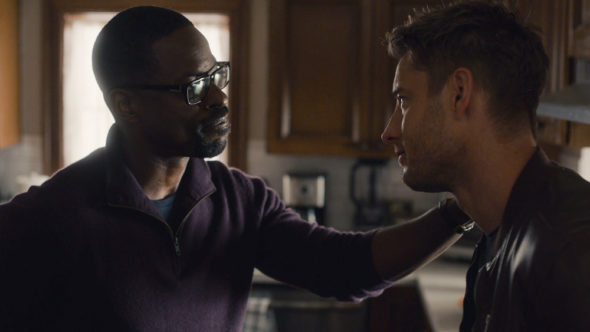 This Is Us is currently airing its fifth season on NBC, and fans will have fewer episodes than expected before the season finale airs on May 25th. Only 16 episodes of the family drama will be produced this season.

In 2019, NBC renewed the drama for three seasons of 18 episodes each for seasons four, five, and six.

Per Entertainment Weekly, the reason there will be fewer installments is the pandemic. Several other series have also faced similar shortened seasons due to shutdowns and the additional time it takes for COVID-19 protocols. It is not yet known if two additional episodes will be added to next season’s order.

This Is Us will return with the three remaining episodes of the fifth season on May 11th.

What do you think? Are you a fan of the This Is Us TV series on NBC? Are you upset by the shortened season?

Please don’t cancel this show. This is one of the very few shows about family life with no violence, drugs and deals with common everyday issues. Another show cancelled was The Village, we were disappointed as this one too was so good.

My family, friends and I love “This is Us” we need and want the to extra two episodes. Please please don’t cancel this show it is a beauitful love story and hits home with us and so many people. I will sadly miss “This is Us” if its canceled.

This Is Us is my favorite show. Of course
I miss it. But I’d much prefer you all to stay safe. Absence makes the heart grow fonder.. You have done a fabulous job with it. I truly pray for a gazillion
More seasons. Keep this amazing show going. ❤❤❤❤❤❤❤

I’m disappointed actually but I understand the reason !

This is Us is a wonderfully written show. I never miss an episode and I have very few shows that I watch. The TV is mine on Tuesday nights. I miss it when it’s not on and look forward to when it returns. Keep up the good work. Love this program

Yes I am a big fan of This is us! I am very disappointed that they are shorting the season, but I can live with that as long as they come back strong with a new season! And no talk of cancelling the show.

I love the show but do what is best for the actors and crew. However give us our promised epidodes next season.

I gave up on the show after last year. Too much jumping around between different stages of peoples’ lives. I will not watch any further. Also, the music is very annoying.

Totally spoilt it for us this dis jointed airing of episodes ! We are in the UK and love the show but it’s really pit us off watching it as it’s too far apart

This is ridiculous! We are already facing the end of the series, now we have to deal with a shortened season?? I don’t understand why? This isn’t fair to the fans!

Calm down, it’s just TV and they have a lot to deal with because of covid. They are people at the end of the day and they need to be safe

“This is Us” is one of the best shows I’ve seen on TV. The cast, the writing and direction are so well done. If there is any way to renew the show at a later time (a sabbatical?), that would be fantastic. Please work to preserve this series!