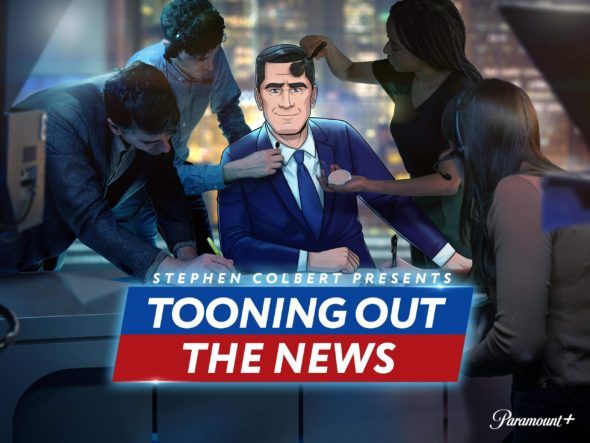 Tooning Out the News is returning for a third season next month. Seasons one and two were released on CBS All Access and its successor, Paramount+, but the new season will air on Comedy Central. The third season of 13 episodes will follow The Daily Show with Trevor Noah on Wednesday nights.

Comedy Central revealed more about the new season in a press release.

The series will air 13 episodes on Wednesday nights following “The Daily Show with Trevor Noah.” Each episode features three segments that focus on topical news of the day, the week’s most dominating stories, and special guests. The weekly episodes will feature returning and all-new characters across the current show segments: “Big News,” “Virtue Signal,” “Hot Take,” and “Inside The Hill.”

“I am so excited that Comedy Central is the new home of Stephen Colbert Presents Tooning Out the News and look forward to CNN trying to fire my anchors before learning it airs on a completely different network,” said Colbert.

Animated news anchor James Smartwood added: “After leaving CNN in solidarity with Jeffrey Toobin, being terminated from MSNBC for calling for an innocent total no-fly zone over Europe, and getting frog marched out of Fox News for instigating one measly gin-fueled airport brawl, I’m thrilled to bring my talents to the world’s premiere journalistic network, Comedy Central, until the instant I receive a call from the Saudi Comedy Channel.”

“Stephen Colbert Presents Tooning Out the News” joins MTV Entertainment Studios’ growing arsenal of adult animation including previously announced series “Digman!”, “Everybody Still Hates Chris,” “Jodie,” a spin-off of the iconic “Daria” franchise with Tracee Ellis Ross in the titular role, the film and the series return of “Beavis and Butt-Head” and “South Park.”

The first and second seasons of “Stephen Colbert Presents Tooning Out the News,” are available to stream exclusively on Paramount+.

Check out a preview of Tooning Out the News below.

What do you think? Are you excited about the return of this political satire series? Have you watched any episodes from the first two seasons?

Ironically, nothing has been able to hold that time slot since The Colbert Report left the network. So let’s see if Colbert can take it back…. even though he’s literally competing with himself by doing so.