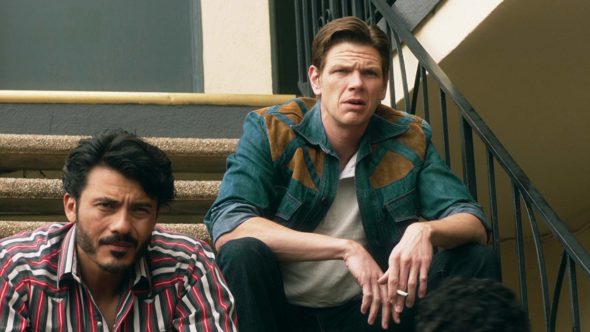 Animal Kingdom is making a small casting change. Rigo Sanchez, who appeared on the series during season four as a recurring member, will be a regular member of the cast for season five.

Deadline revealed the following about Sanchez’s role on the TNT series:

“In season 4, Sanchez’s Manny was the leader of a group of career criminals. He’s shrewd, ruthless, the brains of the operation and the “parent” of the crew. He appeared in 10 episodes. In season 5, the dynamics between Janine, Manny (Sanchez), and Jake (Jon Beavers) are shifting as the crew comes back together and Janine decides she wants to operate out of a little town called Oceanside.”

An exact premiere date for Animal Kingdom season five has not yet been revealed. The series will air on the network later this year.

What do you think? Are you a fan of Animal Kingdom? Are you happy to see Rigo Sanchez being bumped up to a series regular for next season?

Yes I’m happy to see happy to see that Rigo Sanchez will be a regular on the show. But I’d like to hear more about Finn Cole’s “J” role. Will he be taking over the family business? Finn is perfect to take the lead and show everyone who the boss is. In my personal opinion with Ellen Barkin being gone the only way I can stay interested is if Finn takes control! Soooooooo excited for the new season to start!! Thank you for keeping Animal Kingdom on air! So tired of falling in love with a show for it to… Read more »

Great series but I’ll really miss Smurf! She was the epitome of a Ma mob boss!

I totally agree, getting rid of Smurf was a bad idea. Not sure of their thinking. Not sure it will have the same flavour now.

Ellen was the show. These guys were just a bunch of idiots running around breaking into places

I think the guys just got jealous because Smurf was the show. So they decided to get rid of her and leave the men in charge. The female they have Now does not have any charisma.

Love the show but Smurf’s the star – should find a way to bring her back.

That is so funny. Thank you.

Need to quick come up with a devious part to replace Smurf.. Not the same without her. Josh is hard to take serious too goody goody fake actor. Need to make Andrew leasd the family. Crazy. Psycho orders.

I enjoy J I feel like he makes stable decisions in where the heists should take place as well as finding out information.. Pope is unsteady and seems like a power trip and could get everyone in trouble with his actions

I LOVE Jay’s character. He is no bs, no nonsense, smart, unemotional, and he handles it. Pope is too unstable & is a liability. Especially keeping that junkie, Angela around. Dumb.

Love this show, although I think killing off Smurf was a bad decision. Even so, the show is fantastic! Looking forward to the next season.

Like the show don’t have an opinion about Rigio. I do think the show has lost some of its centering without Smuf. Ellen Barkin added a compelling character, like the hub of a spoked wheel.

Can’t deny that I’m also concerned about a no Smurf version of Animal Kingdom…but I’m hoping for the best. I thought SVU would suck when Elliot was written out of the series and it turns out, I prefer SVU without him! Hoping the same thing happens with AK…

I understand what you’re saying but I love Ellen Barkin as Smurf.

She was bad ass. I think they will have her written in the way they did for her character growing up. Like when Jay remembers something from the past, they will take us back, then it will help him to remember something for the present. Hard to explain. Or Pope will be haunted by Smurf. Just kidding.

Does anyone know how I can watch season four for free

Have you tried YouTube? I watched on Amazon, which of course isn’t free unless you subscribe. I did have to pay for season 4 though on Amazon.

On Demand. Or they may even have a marathon day right before this season airs.

I liked it also. And the actress who played her was great.

I absolutely love this show!!! I’m looking forward to season 5, and I will certainly miss it when it concludes! Fabulously written and phenomenal acting!!! ❤️❤️❤️❤️❤️

Can’t wait.Smurf should appear at different times through her son’s minds,MAYBE, dreams.Use it as advice to help keep them strong and on top.Let them have that sense. SMURFS cameo would be awesome since she isn’t a regular.

Totally agree w/you. That would be awesome!

Love this show! We locals go through withdrawls waiting for the filming and the new seasons to air
Can never find info on filming dates.
Thanks for this show!

This show has sucked since they let Ellen Barkin go. She was the show!

Exactly,but she can’t live forever,They could have her appear the whole season through dreams,visions,sense etc etc.It would work cause it is better than no smurf

How can u say show sucked after she left since she left on the last episode of the show. Give the boys a chance to carry it from here. Such an awesome show and still lots of possibilities of Ellen coming back in a flashback or etc

She left on the 2nd to last episode. And she won’t be back, she was fired from the show for behavioral issues including physical violence/complaints from other cast members.

Source? My understanding, from Ellen Barkin on Twitter, was that she was fired because of ageism. Where did you get your version?

Did I miss something…? Has there been episodes since her death? Wasn’t that how the last aired season ended?

John Thibeault
Reply to  Just me

Give the boys a chance and I think we haven’t seen the last of Smurf yet. Lol. Love this show!

A Zamora
Reply to  John Thibeault

Smurf should have been killed off in the series finale not season finale. Let’s see if show can make it without her. Killing of the oldest son early too was a mistake. Fear The Walking Dead killed off alot of regular cat members too soon and now show is garbage!

Missy
Reply to  Just me

Yes! I believe there was one more episode in the season.