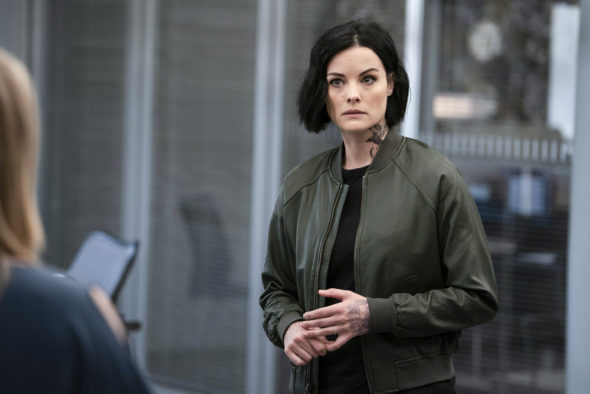 Is Blindspot on its way out? NBC has pulled the TV show from their Friday night lineup, Variety reports.

The drama centers on Jane Doe (Jaimie Alexander), an amnesiac who is found in Times Square and may hold the key to a major conspiracy. The cast also includes Sullivan Stapleton, Rob Brown, Audrey Esparza, Ashley Johnson, and Ennis Esmer.

Blindspot has been pulled from NBC’s Friday night lineup for the duration of sweeps, which begins this week and ends in late May. The series will return for the remainder of its fourth season on May 24th.

It’s unclear why NBC has removed Blindspot from its regular time, but it could be a sign the show is headed towards cancellation. Season four has continue to dip in the ratings and so far is averaging a .48 in the 18-49 demo and 2.835 million viewers. That’s a near 20% ratings decrease compared to season three.

NBC Nixes “Blindspot” from May Sweeps Period
The show’s three remaining episodes this season (previously set for May 3, 10 and 17) will now run across two Fridays, May 24 and 31.”

What do you think? Do you watch Blindspot? Do you want a fifth season?

Yes! Definitely! I love this show. I’ve watched it since day 1. Please let us see a season 5!

Blindfold is a series filled with suspense and intrigue.I have watched it from it’s beginning and hate to see that it may perhaps be cancelled after season 4. Blindspot’s death sentence, unfortunately, started when the network delegated it to Friday night. Please, NBC, don’t cancel this series.

Please renew Blindspot for season 5. It’s one of the best original shows on tv.

I don’t think it’s fair that blindspot has been shelved albeit temporarily and keeping fans waiting impatiently I might add. Also moving blindspot from its previous time slot for seasons 1-3 to a Friday night probably didn’t help ratings either. There’s still plenty of stories left to be told and we need more time to explore Kurt and Jane’s relationship and Patterson and Rich’s relationship. #renewnbcblindspot #season5

Absolutely! This show should be renewed. Don’t cancel it.

Oh yes, I want a 5th season and many more after that. I love this show and all the actors.

Please keep Blindspot on and do not cancel it. I have seen this since the beginning and it would be a shame to cancel this show. It has adventure, drama, love and it makes you think. Most of the shows on TV are for morons. This is a GREAT show – please keep it!!!!

YES. DEFINITELY. This is a great show with an unique back story which makes for a series of plot twists up and down.

NBC is the dumbest network out there..if a series shows the slightest bit of intelligent interesting & ideas that MIGHT cause you to think….well out comes the ol’ ax (like Timeless) Words fail

We love Blindspot ,its sad when they pull a show when ur so attached to the charactors unfortunately the older people don’t matter in ratings!!

I love Blindspot, and my favorite character is Rich .Com. His humor and banter with the Agents keeps the show light and moving. You can’t cancel without getting to the bottom of all the tattoos!!

My husband and I just love the show. We will truly miss the excitement of the show. We only have a few shows we record and dedicated time to watch it. Blindspot was one of them.