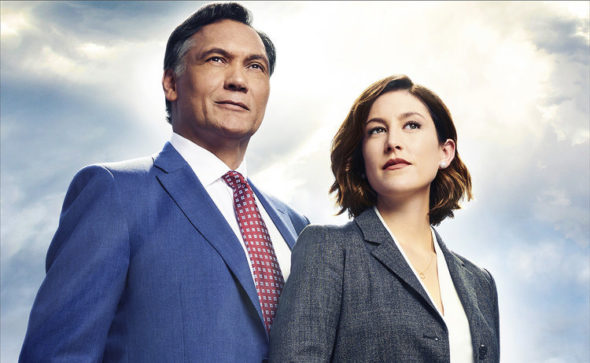 Did Sydney make the right choice in the first season of the Bluff City Law TV show on NBC? As we all know, the Nielsen ratings typically play a big role in determining whether a TV show like Bluff City Law is cancelled or renewed for season two. Unfortunately, most of us do not live in Nielsen households. Because many viewers feel frustration when their viewing habits and opinions aren’t considered, we’d like to offer you the chance to rate all of the season one episodes of Bluff City Law here. *Status update below.

An NBC legal drama, the Bluff City Law TV series stars Jimmy Smits, Caitlin McGee, Scott Shepherd, Barry Sloane, Michael Luwoye, MaameYaa Boafo, Stony Blyden, and Jayne Atkinson. Coming from a famous Memphis family that’s known for taking on injustice, a brilliant lawyer named Sydney Strait (McGee) used to work at her father Elijah’s celebrated law firm until their tumultuous relationship got in the way. After barely speaking to Elijah (Smits) for years, Sydney is suddenly thrust back into the family fold when her philanthropist mother passes away unexpectedly. In the wake of the loss of his wife and in hopes of reconnecting with the daughter he loves, Elijah asks Sydney to rejoin his Civil Rights firm and take on a chemical company whose product may cause cancer. Despite her lingering resentment and distrust, she agrees because she knows that working alongside her father is her best hope at changing the world — as long as they can find a way to get along. No sooner has Sydney returned than she stumbles on a secret that Elijah has been keeping from her that may change everything.

What do you think? Which season one episodes of the Bluff City Law TV series do you rate as wonderful, terrible, or somewhere between? Should NBC cancel or renew Bluff City Law for a second season? Don’t forget to vote, and share your thoughts, below.

Love, love the show. Hope it’s on for a long time.

I too find this show intelligent, amusing and rather wonderful! To say nothing of how GREAT it is to see Jimmy Smits back on TV! Please do not cancel this fledgling series. Give it a chance to bloom! Put “Bobby” back on the roof with his boxer friend and his pigeons…or find a similar hook. This show is growing nicely! Please keep it!

I totally agree. It’s nice to have a show that isn’t filled with killing and hate.

This series is very creative and that’s why it appeals to me.
The episodes deal with unusual cases and the cast, especially, Jimmy Smits, is very good, their characters,
believable. Please reconsider not canceling it

Yes!!!!!!!!!! I totally agree. Nice to see something creative and interesting.

I really love Bluff City. It ‘s a pleasure to watch something that is decent and no bad language. I’m really enjoying Jimmy Smits. His accent is so subtle. What a great cast.

I loved all the episodes so far. My husband and I both watched them and vote to keep them on the air. Better than most of the top rated shows, in our opinion!! We love Smitts and his daughter!!

I wasn’t sure about this series after the first episode but it has become on of my favorite new shows. I think I like all of the different relationship issues. I’m disappointed it has not been renewed.

I liked this show at first but now I think it’s a bit boring. Mr. Smits is a good actor but just can’t seem to find the right show.

I LOVE THIS SHOW! I was very pleasantly surprised by how much I enjoyed it! I was hopelessly hooked after the first 15 minutes of episode 1. I love the court room drama, of course, but the personal story(s) of the characters was totally immersive as well! I can absolutely see this show running for a very long time. I think once people catch on to watching it, it’ll become an all time favorite for many! Very impressive so far.

Love, love Bluff City Law…heartwarming, passionate, funny…. comforting. Why? The good guys are winning! In a world where justice is elusive and humanity is so often ignored and marginalized, Bluff City delivers -straight to the heart. Ask yourself this? At the end of these first two episodes, what did you feel? Heres my take: a sense of pride and empowerment on behalf of those who have little voice. Power and tenderness…I confess, at the end of the pilot, I was choked up but also pumped up. I felt the pain and I felt the joy. Isn’t that what a good… Read more »

Exactly what she just said. Awesome show, and they’re thinking of canceling after just a few shows? Come on, it’s not gory or gross and not sci-fi…so what? It’s great! It has passion and it makes you feel good because there’s still good in our country. They should at least give it the rest of the season and a 2nd, for heaven’s sake.

Really enjoyed this show. Most of the law shows get so boring, even at first but this one kept my attention the whole way through the show.

Exactly!! And not every episode is some gory murder!! I love the edgy controversies and the characters!! S1E10 tore me up!! They can’t leave us hanging!!

didnt click for me, same type of legal drama as seen before, a bit predictable and boring, will still give it a second /third episode look before i decide if i want to commit to a full season, dont want another soap opera show withing a show

apparently you haven’t seen all the episodes thru 5., We’re bored with the top law shows also, but this is a great show!!

I thought the season opener was excellent

I identified personally with the first show and was hooked from ep 1 but it kept getting better. Each episode had more than one story and the ending scene always had a kicker for the next episode. I’ve watched all 10 now at least 4 times, I know that’s odd but I feel I know the characters in person now. I feel their stories. These are excellent actors, the writers have a feel for their subject matter I haven’t seen in a long long time. The location music and color of the show feels like home! We need show like… Read more »

We enjoyed the first episode and look forward to next week.