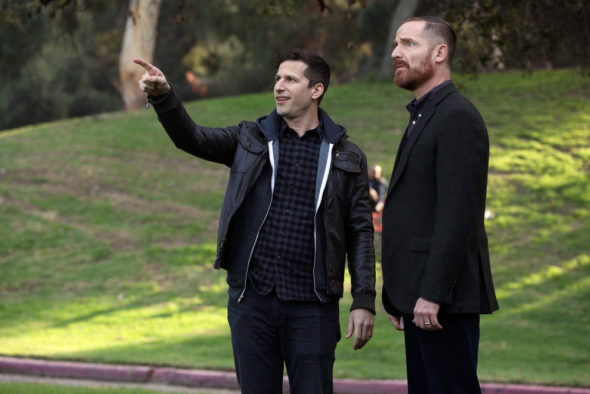 Brooklyn Nine-Nine is getting ready for its final bow on NBC, and the network has announced a premiere date and released a trailer for the eighth and final season.

Andy Samberg, Andre Braugher, Terry Crews, Melissa Fumero, Stephanie Beatriz, Joe Lo Truglio, Dirk Blocker, and Joel McKinnon Miller star in the comedy, which follows the cops at the 99th District in Brooklyn. In year eight, the crew will have a tough year due to the pandemic.

NBC revealed more about the return of Brooklyn Nine-Nine in a press release.

“The eighth and final season of Brooklyn Nine-Nine will premiere Aug. 12 at 8 and 8:30 p.m. ET/PT. The series will air each Thursday in those timeslots.

Brooklyn Nine-Nine follows the exploits of hilarious Det. Jake Peralta (Andy Samberg) and his stoically ever-professional Capt. Raymond Holt (Andre Braugher), along with their diverse, lovable colleagues as they police the NYPD’s 99th Precinct. In this final season of the series, Jake and the squad must try to balance their personal lives and their professional lives over the course of a very difficult year.

Rounding out the ensemble is Sgt. Amy Santiago (Melissa Fumero), who has a passion for organization and a weakness for dork dancing; Lt. Terry Jeffords (Terry Crews), a mountain of a man whose most powerful muscle is his sweetheart; Jake’s best friend and human puppy dog, Det. Charles Boyle (Joe Lo Truglio), and the incredibly secretive, tough-as-nails Rosa Diaz (Stephanie Beatriz). Also part of the Nine-Nine are veteran officers Det. Scully (Joel McKinnon Miller) and Det. Hitchcock (Dirk Blocker), whose only skill as police officers is their ability to make a passable pot of coffee.

In its seventh and most recent season, Brooklyn Nine-Nine reached 24 million viewers and averaged a 5.1 in 18-49 and 9.5 million viewers in total audience measurement. The series was NBC’s #2-rated program in digital and delivered 74 million official YouTube video views in the 2019-20 September-to-May season, for an increase of +66% compared with the previous season’s 44.7 million.

The series is produced by Universal Television, a division of Universal Studio Group, Fremulon, Dr. Goor Productions and 3 Arts Entertainment.”

Check out the trailer for Brooklyn Nine-Nine season eight below.

What do you think? Are you sad to see the beginning of the end of Brooklyn Nine-Nine TV show on NBC?