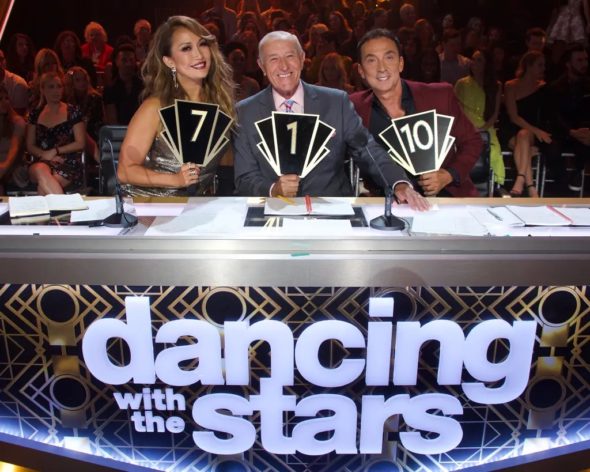 Dancing with the Stars is losing one of its original judges. Len Goodman (above, center) is departing the dance competition series at the end of the current 31st season. The finale airs next week. It’s not yet known if a new judge will join Carrie Ann Inaba, Bruno Tonioli, and Derek Hough next season.

Now 78 years old, Goodman has been on the competition series since its premiere in 2005. He did not appear in season 21 due to scheduling and family commitments. In the 29th season, he presented short segments on dance styles remotely and did not travel to the U.S., due to the pandemic.  He also served as head judge on Britain’s Strictly Come Dancing series, between 2004 and 2016.

Per Variety, Goodman said the following about his exit the Disney+ series:

“This will be my last season judging Dancing With the Stars. I’ve been on the show since it started in 2005, and it has been a huge pleasure to be a part of such a wonderful show but I’ve decided I want to spend more time with my grandchildren and family back in Britain. It’s been such a wonderful experience for me and look forward so much to next week’s finale. I’m sure it’s going to be absolutely brilliant.”

Dancing with the Stars moved from ABC to Disney+ after 30 seasons.

What do you think? Will you be sad to see Goodman exit Dancing with the Stars?

I stopped watching after it moved to Disney+. I have watched the show from the beginning and was very disappointed with ABC/Disney for moving it to a pay to stream service. I miss the show and wish Len the best.

Can not stand Tyra Banks

I no longer watch DWTS because it moved to Disney+. I have been a fan of the show since the beginning. But I refuse to give in to these streaming services. Especially Disney+. Sad that Len is leaving, but I don’t blame him.

They should put this back on ABC. Disney+ is hurting because of all of the subpart content. Don’t believe me? Then why are they going to air episodes of Andor on ABC and Freeform? My Mom loves DWTS but it’s not worth a D+ subscription

I agree with you Cherry. Disney+ is hurting. That’s why they appeared to blackmail Dish to pay them 2 billion dollars when their contract expired. I hate Disney+.