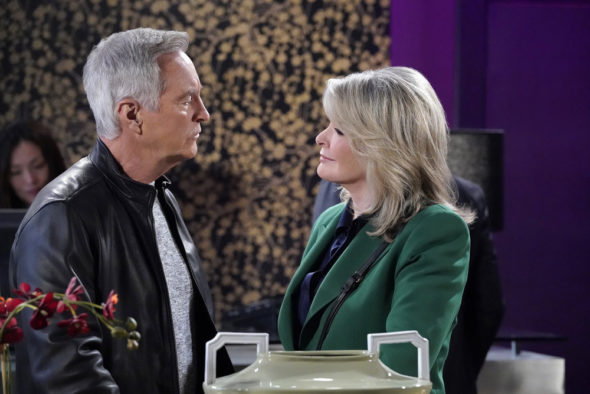 It’s the end of an era. After more than 70 years, NBC is getting out of the soap opera business. The network’s last remaining daytime serial, Days of Our Lives, is moving to the Peacock streaming service as an exclusive in September for season 58. It will be replaced by a new series, NBC News Daily.

Days of Our Lives is the lowest-rated of the four remaining network daytime soap operas and is consistently beaten by The Bold and the Beautiful (CBS), General Hospital (ABC), and The Young and the Restless (CBS). The 57th season of Days has been averaging a 0.26 rating in the 18-49 demographic and 1.681 million viewers. Compared to season 56, that’s down by about 13% in the demo and 1% in total viewers.

The move to Peacock is not unexpected as more viewers have shifted to delayed viewing over the years. Peacock has also released two seasons of the Beyond Salem spin-off over the past 13 months, as well as A Very Salem Christmas movie last December. While Peacock offers paid versions of its streaming service, free tier subscribers can watch commercial-supported recent episodes of Days.

Here’s the announcement from NBC about Days of Our Lives’ departure from NBC:

DAYTIME DRAMA ‘DAYS OF OUR LIVES’ MAKES HISTORIC MOVE TO PEACOCK
“NBC News Daily” Comes to NBC Daytime in First-of-Its Kind Live News Offering
NEW YORK – Aug. 3, 2022 – NBC is evolving its daytime programming lineup with the move of “Days of Our Lives” to stream exclusively on Peacock and the launch of “NBC News Daily” in the drama’s former network timeslot.

Starting Sept. 12, Peacock will become the exclusive home of the fan-favorite drama “Days of Our Lives.” For the first time ever, all new episodes of the 58-time Emmy Award-winning drama will debut on Peacock daily with the show’s robust library already available to stream for Peacock Premium subscribers. The historic move to Peacock creates the ultimate destination for daytime fans to access the library, new episodes and Peacock Original “Days of Our Lives: Beyond Salem” in one place.

“This programming shift benefits both Peacock and NBC and is reflective of our broader strategy to utilize our portfolio to maximize reach and strengthen engagement with viewers,” said Mark Lazarus, Chairman, NBCUniversal Television and Streaming. “With a large percentage of the ‘Days of Our Lives’ audience already watching digitally, this move enables us to build the show’s loyal fanbase on streaming while simultaneously bolstering the network daytime offering with an urgent, live programming opportunity for partners and consumers.”

ABOUT “DAYS OF OUR LIVES”
“Days of Our Lives,” a consistent favorite among fans and critics alike, aired it’s 14,000th episode in 2020 and remains NBC’s longest-running series. The show has garnered 58 Emmy Awards, including most recently 2018’s Outstanding Daytime Drama, and 372 nominations, as well as multiple People’s Choice Awards, GLAAD Media Awards, and Prism Awards. The show’s success stems from its consistent commitment to excellence in writing and storytelling – supported by a diverse ensemble of performers – and an uncanny knack for anticipating viewer interests. With its mix of classic genre traditions and groundbreaking narratives reflecting modern life, “Days of Our Lives” remains a perennial favorite among viewers of all ages. “Days of Our Lives” is produced by Corday Productions Inc. in association with Sony Pictures Television. Ken Corday is executive producer with co-executive producer Albert Alarr. Ron Carlivati is the head writer.

What do you think? Are you disappointed that Days of Our Lives is leaving NBC? Will you be watching on the free or paid version of Peacock?

I am watching Days on Peacock free streaming service now and watched the first Beyond Salem as they are both free to stream, but I haven’t been able to watch the second special and the Christmas special because I am 66 years old and on a fixed income. I am so sick and tired of getting hooked on shows that move to paid premium streaming services and I can’t watch anymore. Peacock should offer the show for free still to keep the audience that is already watching it that way.

I’m very disappointed I’ve been watching Day since I was 7 years old I’m 64 now I love Days but I’m not paying for steaming at all, seems that’s all everyone wants.well that’s another show I won’t be watching. BIG MISTAKE NBC.

Extreme disappointment in NBC! Watched this show for over 52 years! If it’s kept free on Peacock, I would watch, but pay every month. Maybe, I might watch for a few months. But, everything is pay. I’m a senior on a fixed income! Rent, medical bills, food all cost a lot. Sad it has come to this!

This is really disappointing! I have been watching it since day 1 and can’t believe NBC is doing this! It’s all about money and I will not pay to watch it on Peacock! So sad that you are trying to force remaining viewers to switch to Peacock.

The post says that you can watch recent episodes of Days for FREE on Peacock. I’ve watched it for months that way and also watched all the Beyond Salem episodes as they came out. Do people not read or do they just like to complain? I understand if you don’t have access to high-speed Internet but, other than that, come on!

If you notice, a lot of the people that are complaining are seniors on fixed incomes and can not afford all the premium streaming services. Those people have given up on Cable TV because of the high price and so do not have TVs anymore (like me), and stream all their TV shows on computer without access to a TV provider.