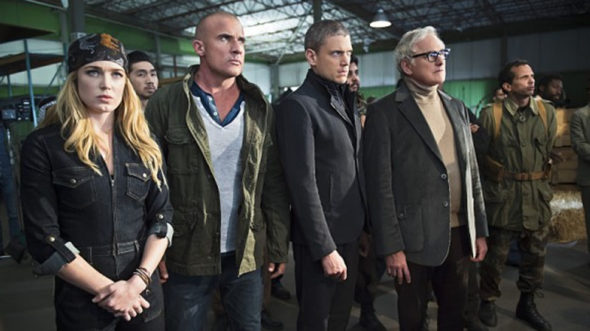 What’s next for DC’s Legends of Tomorrow? The CW just released a new preview for the TV show’s season four return in April.

Season four of DC’s Legends of Tomorrow returns to The CW on April 1st at 8 p.m. ET/PT.

BELIEVE IT OR NOT – When the Legends hear that Mona (Roman Young) has let a fugitive go, they must head to 1961 Mexico City to clean up her mess. Mona tries to convince the Legends and the Bureau that the people responsible for releasing the fugitive were some mysterious Men in Black and not her. With no evidence to back up her theory, the Legends must decide if they should trust her and go against the Bureau. Meanwhile, Nate (Nick Zano) and Zari (Tala Ashe) go on a recon mission to find out what Hank (guest star Tom Wilson) might be hiding from everyone. Caity Lotz, Matt Ryan, Brandon Routh, Dominic Purcell, Jes Macallan and Maisie Richardson-Sellers also star. Andrew Kasch directed the episode written by Keto Shimizu & Tyron B. Carter (#409). Original airdate 4/1/2019.

WHO IS TELLING THE TRUTH? – When Hank (guest star Tom Wilson) commandeers the Waverider in 1973, the Legends find themselves on the run in an RV after kidnapping the President who is only able to tell the truth. With the help of Constantine (Matt Ryan), they discover the reason that none of them can lie making for an uncomfortable family road trip. Meanwhile, Nate (Nick Zano) and Zari (Tala Ashe), with the help of Nora (Courtney Ford) and Gary (guest star Adam Tsekhman), work together to find out what Hank is really up to. Caity Lotz, Brandon Routh, Dominic Purcell, Maisie Richardson-Sellers, Jes Macallan and Ramona Young also star. Viet Nguyen directed the episode written by Matthew Maala & Ubah Mohamed wrote the episode (#410). Original airdate 4/8/2019.”

What do you think? Are you a fan of DC’s Legends of Tomorrow? How do you think season four will end?