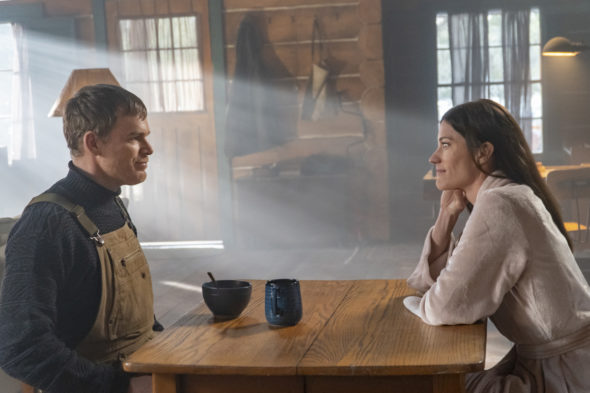 Is this still the same old Dexter Morgan? Has the Dexter: New Blood TV show been cancelled? Renewed for a second season on Showtime? The television vulture is watching all the latest cancellation and renewal news, so this page is the place to track the status of Dexter: New Blood, season two. Bookmark it, or subscribe for the latest updates. Remember, the television vulture is watching your shows. Are you?

Airing on the Showtime cable channel, the Dexter: New Blood TV show is a continuation of the Dexter television series. The sequel series stars Michael C. Hall, Jennifer Carpenter, Julia Jones, Jack Alcott, Alano Miller, Johnny Sequoyah, Clancy Brown, and David Magidoff. In the original show, Dexter Morgan (Hall) is a complicated and conflicted blood-spatter expert for the Miami police department who moonlights as a serial killer. In the series finale, he is presumed dead but is revealed to be leading a quiet life, working for a lumber company in Oregon. Now, 10 years later, we find Morgan living as shopkeeper Jim Lindsay in the fictional small town of Iron Lake, New York. He has developed a relationship with Angela Bishop (Jones), the town’s chief of police, and has suppressed his serial killing urges. Morgan may be embracing his new life, but in the wake of unexpected events in this close-knit community, his inner “Dark Passenger” inevitably beckons.

The first season of Dexter: New Blood averaged a 0.12 rating in the 18-49 demographic and 594,000 viewers in the live+same day ratings (including DVR playback through 3:00 AM). While these numbers don’t include further delayed or streaming viewing, they are a very good indicator of how a show is performing, especially when compared to others on the same channel.  Find out how Dexter: New Blood stacks up against other Showtime TV shows.

Will Showtime cancel or renew Dexter: New Blood for season two? The ratings are very strong but, given the fate of Dexter Morgan, I don’t expect a renewal. If Showtime wants to continue the story of other characters, I think they’ll give that show a new title. I’ll update this page with breaking developments. Subscribe for free alerts on Dexter: New Blood cancellation or renewal news.

What do you think? Do you hope that the Dexter: New Blood TV show will be renewed for a second season or, is one season enough?

So disappointing to do all of that work and get everyone re-interested in the show again and then pretty much crap on everyone. The fans deserved better than what we got. There was no reason to have to kill Dexter off. He was the master of getting out of jams and having things go his way. He wasn’t hurting anyone except those that deserved it. This was Showtime’s moneymaker and it’s cornerstone show. To blow all of that hell made absolutely no sense. You don’t kill the goose that lays the golden eggs. A true disservice to all of the… Read more »

I wish I could “unsee” NB. As a “true fan” of the original Dexter series, I can say that even though Michael Hall was in NB, Dexter never showed up. There was no meticulous, intelligent, careful monster. He didn’t have “the look.” He didn’t plan, or hunt his victims. They expected us to believe he hadn’t killed in 10 years…right . There were so many inconsistencies it was ridiculous. The ending of season 8 may have been disappointing, but the NB series was disgraceful. The writing was sloppy and rushed. The characters were underdeveloped and hollow. I’m currently rewatching the… Read more »

The only way to fix the abomination that was “New Blood” is to pull a Dallas and have Dexter awake from a long, involved dream. We find him back in Miami, Deb and LaGuerta are still alive, and the regular cast returns. New Blood was simply terrible and needs to be cast as nothing more than a bad dream. Yuck.

My absolute favorite show! Terrible ending. Please let it all be a daydream and bring Dexter New Blood back for Season 2, and Season 3, and Season 4…

I loved Dexter New Blood! I loved the setting. I hated the ending. Please bring Dexter back! (I don’t think I will watch if its just Harrison).
I love the idea of him coming to LA. That was such a great tease…. that would have been awesome. I think we will all be forgiving if Dexter survives–just please no more dead sister talking to him. I wish the writers would craft better season finales. (this one sucked, as did the last series finale).

Damn, it was a good season. And God damn, I hates the ending.

I absolutely love Dexter. So disappointed with the ending. Why bring it back to just end it this way. If there is a second season I hope Dexter is alive or I won’t be watching it. I got Showtime just to watch Dexter and you guys do this. WOW. Way to sucker me in.

Yes! I feel the same.

Same here. Literally got Showtime for Dexter NB. No Dexter? No sub. And what is with this tragic “target demo?” Don’t you know that Gen X is what moves mountains? We are loyal viewers of shows we like. And we remwatch them! Who cares about watching on the drop day? We are busy, but when we have time, we watch what’s on our list, and we binge! You need to pay better attention to the folks who have the $ and find the time to watch shows these days. With the shortening attention span from 7 sec tiktoks, you know… Read more »

This revival quickly got up to the same level as the original Dexter. By having many young people in the story line, it will attract a larger audience along with diehard original Dexter fans. Glad it’s back. Have been waiting since the series finale of the original show. You need to give us more Dexter!!!! The only thing that should be allowed to ‘kill it’ would be if Michael C Hall said he doesn’t want to continue. This part was made for him, and he’s still got the ‘it’ factor to play the part. Please keep it going!! Thank you!!

What in the hell is going on? I Agree with everybody us bring dexter back make it a dream. I mean one season good grief people.

How could you bring it back after 8 yrs., get us all interested and excited and end it…unfair. Please make that finale all a dream and bring back Season 2.

Please have a second season of Dexter New Blood! This was better than ever!

Please make a second season!!! This show is too good to have to end again!