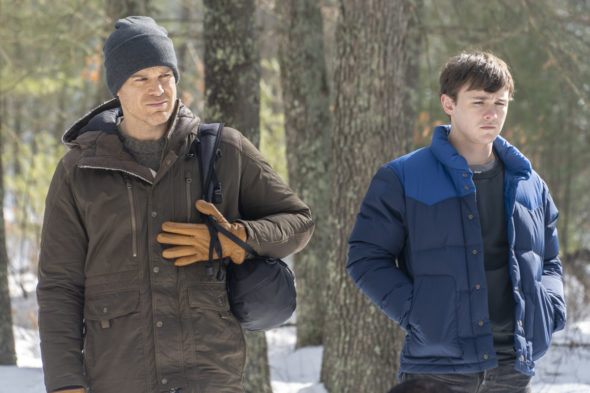 Has this serial killer truly changed in the first season of the Dexter: New Blood TV show on Showtime? As we all know, the Nielsen ratings typically play a big role in determining whether a TV show like Dexter: New Blood is cancelled or renewed for season two (in this case, it appears to be a one-season mini-series). Unfortunately, most of us do not live in Nielsen households. Because many viewers feel frustrated when their viewing habits and opinions aren’t considered, we invite you to rate all of the first season episodes of Dexter: New Blood here.

A Showtime crime drama series, the Dexter: New Blood TV show is a continuation of the Dexter television series. The sequel series stars Michael C. Hall, Jennifer Carpenter, Julia Jones, Jack Alcott, Alano Miller, Johnny Sequoyah, Clancy Brown, and David Magidoff. In the original show, Dexter Morgan (Hall) is a complicated and conflicted blood-spatter expert for the Miami police department who moonlights as a serial killer. In the series finale, he is presumed dead but is revealed to be leading a quiet life, working for a lumber company in Oregon. Now, 10 years later, we find Morgan living as shopkeeper Jim Lindsay in the fictional small town of Iron Lake, New York. He has developed a relationship with Angela Bishop (Jones), the town’s chief of police, and has suppressed his serial killing urges. Morgan may be embracing his new life, but in the wake of unexpected events in this close-knit community, his inner “Dark Passenger” inevitably beckons.

What do you think? Which season one episodes of the Dexter: New Blood TV series do you rate as wonderful, terrible, or somewhere between? Do you think that Dexter: New Blood should be renewed for a second season on Showtime? Don’t forget to vote, and share your thoughts, below.

I’d really like to see another season and more. Might be fun to check in on former characters like Lumen. But new scenarios could be readily developed.