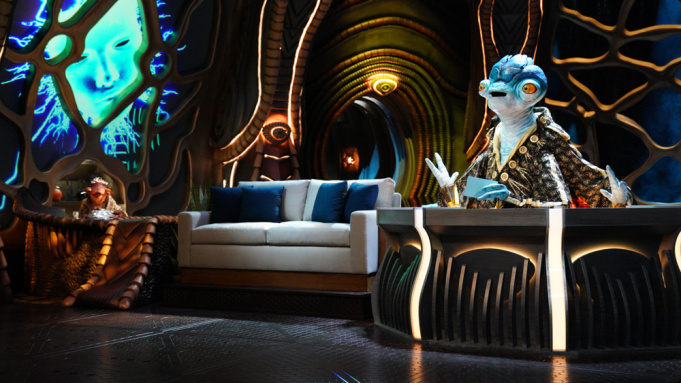 Get ready for an out of this world talk show. Earth to Ned has been ordered to series for Disney+. The series will premiere on the new streaming series in 2020.

Earth to Ned comes to Disney+ from The Jim Henson Company, which is behind the Muppets and more. Deadline shared the plot of the series:

“The comedic half-hour series follows Ned, a blue-skinned alien and his lieutenant Cornelius, who were sent to scout Earth for an eventual invasion – but instead became obsessed with our popular culture. Now, they host a talk show, broadcast from the bridge of their spaceship hidden deep underground, where they interview our most precious commodity, celebrities, to talk about Ned’s current pop culture obsessions. Ned will be bringing real-life celebrity guests to his ship from across the known universe and interviewing them, late night talk show style, in hopes of producing the ultimate talk show – making Ned a celebrity and putting him further off mission. And the more Ned learns about our human culture, the more obsessed he becomes.”

“Earth To Ned is what happens when a very traditional television format gets completely turned on its head, resulting in a wholly original talk show starring some of the most complex puppets we have ever created. Our alien host Ned adores and embraces everything about Earthlings – including our quirks, and even our flaws. I think adults will especially appreciate his positive view of our world, which makes our show stand out in today’s often cynical TV landscape.”

A premiere date for the new talk show has not yet been set. Disney+ launches on November 12.

What do you think? Will you watch Earth to Ned when it comes out next year?