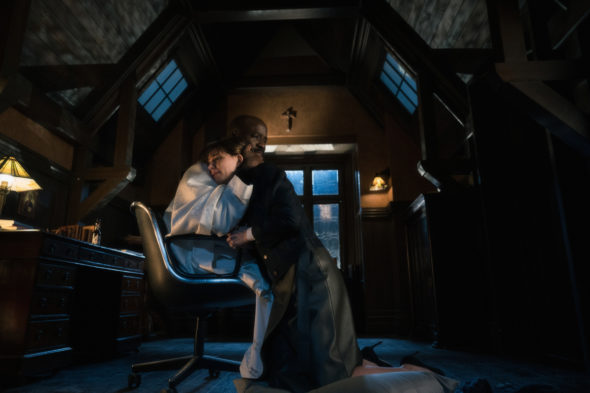 Evil fans do not have long to wait for the return of the series. Paramount+ has revealed that the horror series will return in June with the release of a trailer.

Paramount+ revealed the following about the series in a press release.

EVIL is a psychological mystery that examines the origins of evil along the dividing line between science and religion. The series focuses on a skeptical female psychologist who joins a priest-in-training and a contractor as they investigate the church’s backlog of unexplained mysteries, including supposed miracles, demonic possessions and hauntings. Their job is to assess if there is a logical explanation or if something truly supernatural is at work.

Evil season three arrives on June 12th. Check out the teaser trailer for the series below.

What do you think? Are you excited about the return of Evil this June?

Can’t wait, so excited for the new season. Love the characters and stories ❤ Evil

I love this show and can’t wait to see it

Great show! Glad it has been renewed!

Why is Evil on Paramount + where viewers have to pay ? I love the show but will not pay to see it, that is not right,

If you pay for cable your paying to watch CBS. Cable is going to go the way of the dinosaurs and streaming is cheaper anyway.

Can not wait till the show is back, have to make sure my DVR is setup and ready

Great, wonderful, fabulous shows…one of the very best on TV for years…I absolutely love it..

Thank you for this gem…And it didn’t get ca cancelled…hurrah!!!!!

Honestly speaking, my favorite season was number one. I’ve been watched season 1 for 6 months straight. Season 2 seems to me to take the series in a whole another direction that I was uncomfortable with.

I can’t wait to watch season 3. My husband and I love this series.

Good news, for some reason this series keeps me coming back for more.