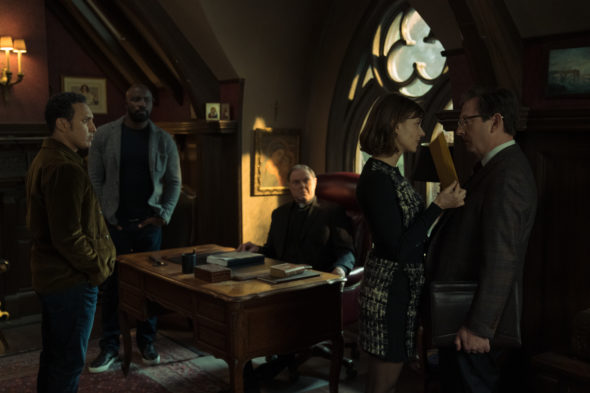 How will Kristen, David, and Ben navigate the changes ahead? Has the Evil TV show been cancelled or renewed for a fourth season on Paramount+? The television vulture is watching all the latest cancellation and renewal news, so this page is the place to track the status of Evil, season four. Bookmark it, or subscribe for the latest updates. Remember, the television vulture is watching your shows. Are you?

Streaming on the Paramount+ subscription service, the Evil TV show stars Katja Herbers, Mike Colter, Aasif Mandvi, Michael Emerson, Christine Lahti, Kurt Fuller, Andrea Martin, Brooklyn Shuck, Skylar Gray, Maddy Crocco, and Dalya Knapp. A forensic psychologist, Kristen Bouchard accepts a job offer from David Acosta (Colter), a former adventure-seeking journalist. He’s now studying to be a Catholic priest and has been tasked by the Church to assess unexplained phenomena. Acosta also recruits Ben Shakir (Mandvi), an even-tempered realist with carpentry skills. He uses those abilities to uncover practical rationales behind “hauntings.” Kristen is certain that science can provide answers to every incident that the trio encounters — until she meets Leland Townsend (Emerson). He’s a sinister man who oozes menace and threatens Kristen and her four young daughters (Shuck, Gray, Crocco, and Knapp). Undeterred, Kristen, David, and Ben set out to assess inexplicable events to see if there’s a logical explanation or if something truly supernatural is at work. The third season picks up after newly ordained David and Kristen have kissed. The two not only have to navigate this fraught new reality, but contend with David’s involvement with “the entity,” an espionage unit within the Catholic church. Meanwhile, Ben finds his brain breaking from their unsolved cases and turns to his sister for help.

Unless they decide to publicize viewership, it is difficult to predict whether Paramount+ will cancel or renew Evil for season four. Given that this series is now established with three seasons under its belt and it also scores well with viewers and critics, I think there’s a very good chance that it will be renewed for a fourth year. I’ll keep my ears open and an eye out for news, and will update this page with breaking developments. Subscribe for free alerts on Evil cancellation or renewal news.

What do you think? Do you hope the Evil TV show will be renewed for a fourth season? How would you feel if Paramount+ cancelled this TV series, instead?