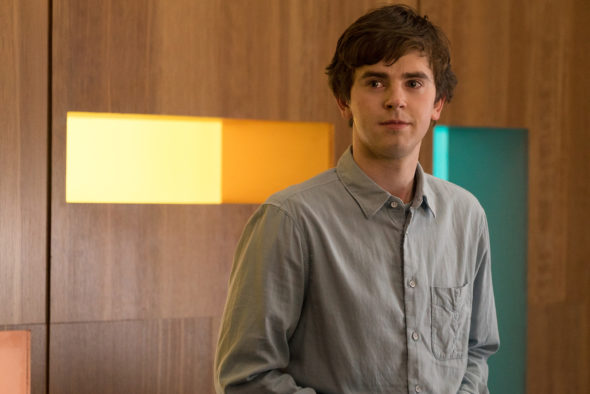 What’s your diagnosis for first season of The Good Doctor TV show on ABC? As we all know, the Nielsen ratings typically play a big role in determining whether a TV show like The Good Doctor is cancelled or renewed for a second season. Unfortunately, most of us do not live in Nielsen households. Because many viewers feel frustrated that their viewing habits and opinions aren’t considered, we’d like to offer you the chance to rate all the season one episodes of The Good Doctor for us here.

An ABC medical drama, The Good Doctor stars Freddie Highmore, Antonia Thomas, Nicholas Gonzalez, Chuku Modu, Beau Garrett, Hill Harper, Tamlyn Tomita, and Richard Schiff. The show centers on Dr. Shaun Murphy (Highmore), a new surgical resident with autism and savant syndrome. His incredible memory and keen ability to perceive spatial relations inform Shaun’s gifted comprehension of his patients. Meanwhile, his autism can hinder his ability to communicate with others. With only the help of his advocate, Dr. Aaron Glassman (Schiff), Shaun must challenge the skepticism and prejudices of the hospital’s board and medical staff, in order to do his job and save lives.

What do you think? Which season one episodes of The Good Doctor TV series do you rate as wonderful, terrible, or somewhere between? Should ABC cancel or renew The Good Doctor  for season two? Don’t forget to vote, and share your thoughts, below.

this is one of the best shows in years

Pleasen renew this show. It is such a good show. We love it.

It was a great show!! We looked forward to every new episode.

Finally, a decent show to watch! Love it!

Finally, something decent to watch! Look forward to every episode. Told friends and family about it. They watch too!

This should be renewed along with Deception and The Crossing.

I was in the medical field for over 30 years before I retired 9 yrs ago and besides Code Black the Good Doctor is the best show on TV. My husband and I look forward to watching it every week. I don’t understand why programs on TV are solely based on ratings. Ratings should be considered by the feelings people have for tbe shows. Its tbe almighty dollar that seems to matter instead of the people.

Do not cancel love this show

“The Good Doctor” is an exciting, and touching, wonderful drama. BEST show on TV! I smile, I cry, I laugh! Yes it needs to continue with season 2 and more!

This show includes the not perfect people who are out there trying. Exclusion needs to be forgotten.

Please renew the Good Doctor. This is one show that my husband and I can watch together. We love all the topics even those that made me cry. This is a very good show.

Brilliant show. We need more like this. Hope they keep this going for a long time.

Love this show…Please bring it back…gives renewed hope for those with children who have autism….the acting is wonderful and the show itself is heartwarming