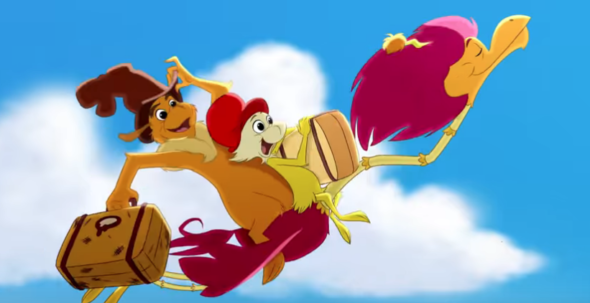 Netflix has a new twist on a classic story. The streaming service just released the premiere date and a new trailer for their upcoming TV show, Green Eggs and Ham, Variety reports.

Based on the Dr. Seuss book, the animated series “expands the story of the delicacy’s persistent champion Sam I Am and picky eater Guy Am I as they go on a road trip to rescue an endangered creature from a zoo, learning about hope, trust and friendship along the way.” The voice cast includes Michael Douglas, Adam DeVine, Eddie Izzard, Diane Keaton, and Keegan-Michael Key.

There were four years of actual production. That was intentional, and that’s about normal for the quality of animation that we were aspiring to,” Stern says. “A typical animated film can take close to three to four years for generally an hour and a half of content. We have, I believe, around five and a half hours of content that we were trying to do at the level of a hand-drawn animated feature in that same amount of time.”

The new series premieres on Netflix on November 8th.

What do you think? Are you a fan of the Dr. Seuss book? Will you watch Green Eggs and Ham the series?