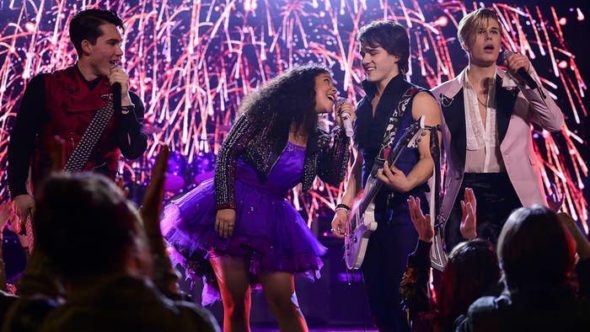 The ghostly band has played their last set. Netflix has decided to cancel the Julie and the Phantoms TV series so, there won’t be a second season.

A musical comedy-drama series, the Julie and the Phantoms TV show stars Madison Reyes, Charlie Gillespie, Owen Patrick Joyner, Jeremy Shada, Jadah Marie, Sacha Carlson, Savannah May, Booboo Stewart, and Cheyenne Jackson. Created by Dan Cross and David Hoge, the show revolves around a young male band called the Phantoms. On the night of their big break in 1995, Luke (Gillespie), Reggie (Shada), and Alex (Joyner) die. In the present day, high school musician Julie Molina (Reyes) struggles to make music following the death of her mother. She ends up summoning the spirits of the band and becomes their lead singer.

The show’s nine episodes were released in September 2020 and we now know that the show has been officially cancelled. Netflix typically makes a decision about the fate of shows within a month or two of a season’s release, No news is often not good news.

Director and executive producer Kenny Ortega broke the news about the cancellation of Julie and the Phantoms via Instagram. He wrote, “Julie and the Phantoms #standtall. Our @julieandthephantoms family want to send our love and endless thanks to our Fantoms all over the world for the tremendous outpouring of love and support you have shown us since our premier. We learned this week that Netflix will not be picking us up for another season. Although our hearts are saddened, we move on with such pride for what we accomplished as a team and the family we built while creating Julie. We hope you will continue to follow us as we move forward with our work and careers. Happy Holidays to you all. Wishing you good health, love and #perfectharmony in all you pursue! Kenny, the Cast, Writers, Producers, Creatives, BC Crew, @columbiarecords, and our devoted @Netflix Team! @netflixfamily”

Joyner responded with “Thank you for memories I don’t deserve ❤️” and Shada wrote, “Love you Kenny. Thanks for giving us the opportunity of a lifetime. Made something so special. Big thanks to all the #Fantoms for keeping it alive ❤️🤘🏼👻”. Reyes responded with “I love you guys all so dearly thank you for all the support remember to stand tall no matter what love you This may be the end of Julie Melina but this is just the beginning.”

May wrote, “To Kenny, The whole JATP team, our fantoms, Netflix….thank you doesn’t even begin to cover it. Sending all of my love” and Marie responded with “We love you all. Thank you for the support and all the love. Flynn out❤️” and Carlson responded with “Family for life. Love you all beyond words. ❤️” Costume designer Soyon An commented, “Forever in my heart will live my JATP FAM BAM. Love you ALL ♥️”.

What do you think? Have you watched Julie and the Phantoms on Netflix? Are you disappointed by the cancellation? Were you hoping that the show would be renewed for a second season?

Wow, I thought for sure this show would be renewed.
Everyone I’ve heard that has watched it really like it. And I even heard a few songs of theirs on Pandora.

This breaks my heart, if I find a petition to bring it back, I will definitely sign it. I can’t believe it. I hope a network definitely brings it back, it deserves a full chance to get the whole story out.

I really think if they did a short movie to tie up all the loose ends it would be very welcomed! I am a senior citizen and I enjoyed the series! My grandkids enjoyed it and I enjoyed watching it with them. I would love to have something that would finish and resolve the cliffhangers. Mother’s involvement? The unfinished business for the phantoms? Their lifer band mate’s issues with stealing from them as a teenager and where in his life it has gotten him? Caleb’s involvement? I seriously think a short movie would be more to the point to tie… Read more »

1
0
Reply
Sad to see such talent go to waste

I agree. This show has proven itself to be a TOP family program. Rotten Tomatoes rated it at 82%. IMDB rated it at 88% and others are similar. Netflix has pulled some truly idiotic crap as of late, so we really shouldn’t expect much in the way of intelligence from this network in the future. I also find it odd, they keep shows with 60% ratings and lower.

I’m hoping Mr. Ortega and find at least ONE network with intelligence to keep is awesome program going. I already have season one and have watched it more than 100 times!