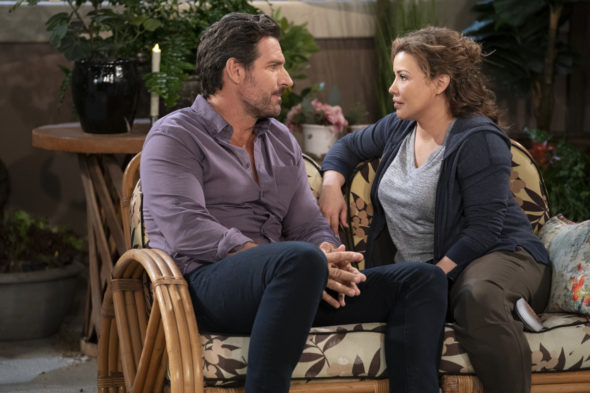 One Day at a Time still had six episodes left of season four to be filmed when the pandemic shut down production. With the series cancelled by Pop TV, those six installments will never be filmed. Gloria Calderón Kellett, the woman behind the Pop TV series, released details about the unfilmed episodes on Twitter.

Justina Machado, Todd Grinnell, Izabella Gomez, Marcel Ruiz, Stephen Tobolowsky starred in the series which is a reboot of the popular 1970s sitcom. The One Day at a Time reboot features Machado (above, right), as a single mom and military veteran, living in Los Angeles and raising her teen children while her mother lives under the same roof.

Check out the details for the remaining episodes of the Pop series below.

When Lydia’s church hires a young, progressive priest (Cruz), Lydia is able to convince Elena to start attending regular Sunday services again. Elena enjoys the positive message for a few weeks, until she misses an opportunity to clarify her sexual orientation and quickly realizes she was never be truly accepted by her church. Lydia takes it upon herself to challenge the priest on this. Meanwhile, Schneider enlists Alex to help him build a crib and baby-proof his apartment. Both of them learn they have a lot to offer each other in terms of father/son relationships.

Since they will never air here are the loglines for the final six episodes of @onedayatatime that we wrote but will never be shot.

Episode 8 Church & Statement written by Sebastian Jones. Summary below. @wcruz73 would have CRUSHED it as our hot liberal priest. Sigh. pic.twitter.com/NO2oFgO1Uy

Now that Penelope is a nurse practitioner, she decides to see what else is out there work-wise, to surprising results. Meanwhile, Elena and Syd bond over their mutual crush, Tanya [the barista, played by Taylor-Klaus], but Elena takes it a little too far. Both Penelope and Elena take advice from Lydia, resulting in the two Alvarez women dealing with the outcome of their decisions.

Season 4, Episode 9 of @OneDayAtATime that will never be shot was called Steppin’ Out Written by @elizacossio

Summary below. @IBexWeBex was set to play Tanya the barista that comes between Syd and Elena. Sigh. pic.twitter.com/r5BwqsjOaW

It’s true, Bex Taylor-Klaus was going to play Tanya (named after @TanyaSaracho ) the hot barista that tempts Elena to stray (of course she stays true to Syd). I was so excited to work with @IBexWeBex — one day! #ODAAT #EpisodesThatNeverGotShot https://t.co/tFRmzQyx3n

It’s New Year’s Eve! Lydia is pumped to celebrate but the fam is tired of the rigmarole of ALL the Cuban traditions and wants to go out. So they hatch a plan so everyone gets what they want. They turn back the clock and do a fake New Year’s Eve for Lydia at 9 pm (with the New York ball drop) and head out to their fun nights. Everyone wins! Until their plans fall apart and they return home to find that Lydia knows what they’ve done. How the new year finds you is how the year will be and it can’t find them mad and not doing things the Cuban way. Now they must make things right before the strike of midnight or the next year will be ruined.

Season 4, Episode 10 of @OneDayAtATime that will never be shot: One Year At A Time Written by Liz Rivera. We were FINALLY going to do an ep about the specific New Years traditions that we do! Also, this episode was going to end with Dr. B getting a kiss from Lydia. Sigh. pic.twitter.com/kARj1HHGei

The Alvarez family road trip to the Grand Canyon extends to New Haven, CT, after Elena hears a rumor that touring the Yale campus will better her chances of getting accepted. To make the long drive comfortable, Schneider offers his RV, which is a replica of the Alvarez home. On the road, Schneider questions whether he will ever be as good a parent as Penelope. Meanwhile, Alex and Lydia catch up on a telenovela until a betrayal Alex has been keeping secret is revealed. Suddenly, Lydia and Alex find themselves living out a real-life telenovela… in an RV.

Season 4, Episode 11 of @OneDayAtATime that will never be shot: Road Trip Written by @debbywolfe

A replica RV of the Alvarez apartment?!? Big emotional monologues?!? This one had it all. Summary below. pic.twitter.com/WH8FraDGuB

Lydia cancels the birthday party Penelope has planned for her, insisting that she’s not in the mood to celebrate. Elena and Alex discover their abuelita is upset about mementos from Cuba that have deteriorated beyond repair. But when they find an old tape of Lydia singing as a young girl, she gets an unexpected birthday present. Meanwhile, Penelope gets “cancelled” by Schneider when she makes fun of Avery’s alternative home birth plan, advocating instead for a hospital birth using traditional medical practices. In the end, Penelope finds the ultimate way to redeem herself, by delivering Schneider and Avery’s beautiful, healthy child… right in the Alvarezes’ apartment.

Season 4, Episode 12 of @OneDayAtATime that will never get shot was called Cancelled Written by @DanSigner & @vbontheset

It’s Lydia’s birthday but she doesn’t want to celebrate? THis one had singing. Dancing. And a moving ending. Sigh. pic.twitter.com/M1MWG2zC3j

When Penelope accidentally sees an email on Elena’s phone and discovers that Elena did not get into Yale, the Alvarezes scramble to try to prepare Elena for crushing disappointment. Meanwhile, Avery and Schneider enlist the help of Dr. Berkowitz to help solve Schneider’s new parent insomnia. (As noted by Kellett, this one had “a twist where Elena wants to stay in L.A. after actually getting into Yale!”)

Season 4, Episode 13 of @OneDayAtATime that we’ll never get a chance to shoot was called Dreams Written by Sebastian Jones & Brigitte Munoz-Liebowitz. This one had the emotional monologues you love & a twist where Elena wants to stay in LA after actually getting into Yale! Sigh! pic.twitter.com/7dsohPDgmz

One Day at a Time aired six episodes of season four on both Pop TV and CBS. A seventh and animated episode was produced after the production shutdown and aired only on Pop.

What do you think? Would you have wanted to see the remaining episodes of season four of One Day at a Time filmed and aired?

I know a good show when it gets me hooked. This show got me hooked and I looked forward to see the next episode. I feel that the writing for this show was also very good and I see they touched on some heavy subjects. Please keep this show going.