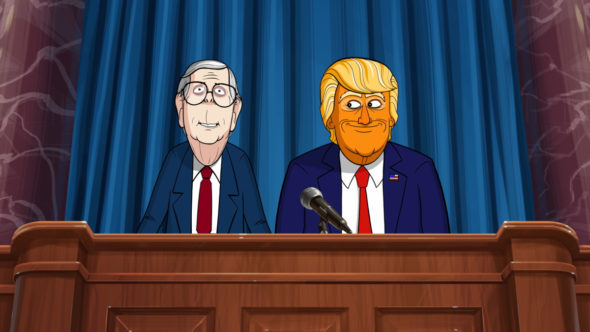 “Every man for himself.” Showtime has announced season three of Our Cartoon President will resume with new episodes in September.

Season three of Our Cartoon President returns to Showtime with new episodes on September 13th at 8:30 p.m. ET/PT.

NEW YORK – July 29, 2020 – The SHOWTIME animated series OUR CARTOON PRESIDENT will continue its third season on Sunday, September 13 at 8:30 p.m. ET/PT. Executive produced by multiple Emmy(R) winner Stephen Colbert, showrunner R.J. Fried and Late Show executive producer Chris Licht, OUR CARTOON PRESIDENT sets its sights on the most consequential election in history to determine who will be the next Cartoon President. Can Cartoon Joe Biden overcome his frequent gaffes and basement isolation to unseat Cartoon President Trump, who’s struggling to win re-election? Season three ended in March of this year with nine episodes and will conclude with the final nine half-hour episodes tied to the 2020 Presidential election.

This season will also feature other Cartoon players: Don Jr. and Eric Trump teaming with Elon Musk and MyPillow’s Mike Lindell to invent a coronavirus cure, Susan Collins escaping with Brett Kavanaugh to Maine to avoid answering whether she’ll vote for Trump and CNN’s Chris Cuomo fighting to be a serious journalist to the chagrin of his older brother, Gov. Andrew Cuomo.

What do you think? Are you a fan of Our Cartoon President? Are you excited for the new episodes coming to Showtime?

This show is still on? Well I would never of known