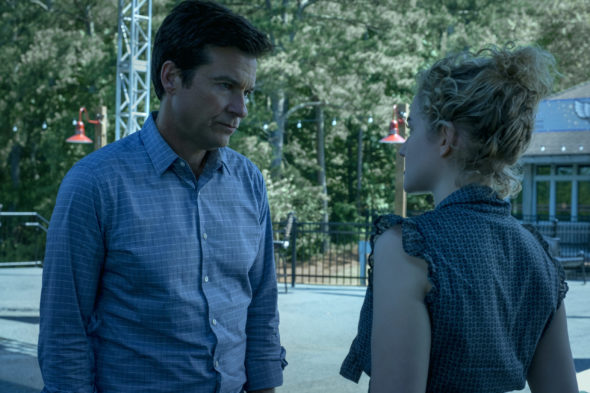 Ozark returned for its third season last week, and the series has not yet been renewed for a fourth season. The series stars Jason Bateman and Laura Linney. Season three ended on a bloody note, so it could lead to big things during season four.

Chris Mundy was asked about a possible fourth season of the Netflix series in an interview with Entertainment Weekly. He said the following:

“Well, if we’re lucky enough to get a season 4, I think it will be about whether or not Ruth really can create something of her own that she wants and is sustainable, or if she wants something else. And I think it will be about if the Byrdes can they turn the biggest mistake of their lives into this huge advantage, and how much will karma catch up with them if they do?”

Mundy also spoke about the end of the season. He said the following about how Ozark ended:

“We thought of the first third of the season as Marty vs. Wendy, and Wendy kind of wins that battle, and then it transitions to this tentative alliance between Wendy and Helen, and by extension Wendy and Marty vs. Helen. By the time it came to the end, we really wanted to hold that tension of these two things cannot cohabitate, somebody’s got to win this battle, because Navarro isn’t going to put up with anything unstable and he was going to have to pick a side. The whole last episode starts in a very tentative way because there’s fallout from things that happened in episode 9, and once it clicks into gear we didn’t want it to stop until the very last possible second.”

What do you think? Did you enjoy the end of season three of Ozark? Do you want a fourth season of the drama?

Absolutely, bring it back!

Awesome show. Bring it back

Absolutely love Ozark. The characters are developed wonderfully and pull you into their life.

Yes, I’d love for a season 4 to be made. I had no clue that season 3 would’ve ended in killing Helen. They can’t leave the audience hanging without giving us another season to tell us why 3 ended like it did.

Yes, please continue this exciting and intriging series. Ozark is a terrific series

Hell yes we need another season after the cliff hanger at the end of the 3rd!

Love the show! Best show on tv. We watched all of season 3 in just three days cannot get enough. The end of season 3 was shocking and cannot wait for season 4 and many more. Love the entire cast. Jason Bateman is the best!

I loved it. One of the best shows on TV. It would be sheer madness to cancel this show. The end was awesome.

The writing on this show is beyond attention-grabbing — outstanding teeth-clenching surprises! Thanks, Jason Bateman! You can do it all, what a talent!

Love the show ,I HOPE !!!theres a 4th season