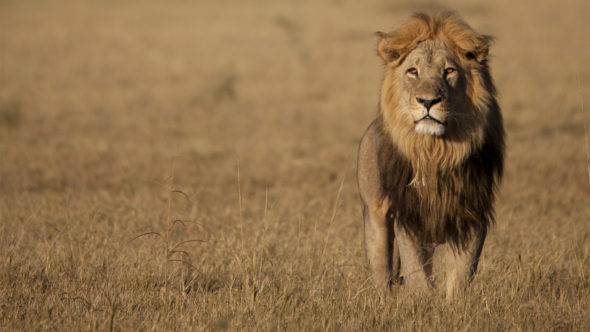 Narrated by Charles Dance, the docuseries gives viewers “a rare look at warring animal clans battling for survival in a remote region of Africa that is drying up after years of flood-soaked abundance.”

(WASHINGTON, D.C., Oct. 18, 2017) – Last season The Wall Street Journal called Savage Kingdom “nature television as Shakespearean drama.” This season brings rebellion as the sins of the lion king are carried out by his sons. Nat Geo WILD’s Savage Kingdom returns with Savage Kingdom: Uprising, a four-part global mini-series series event that tells an unvarnished tale of survival on the African plains. No better night to debut this competitive savagery than Black Friday.

Emmy-nominated actor Charles Dance (“Game of Thrones”) returns to narrate Savage Kingdom: Uprising, a rare look at warring animal clans battling for survival in a remote region of Africa that is drying up after years of flood-soaked abundance. The winners are rewarded with the richest hunting grounds in the kingdom, while the losers are fated to exile … or even death.

“When we introduced the world to the Savage Kingdom last year, it was our version of a real-life ‘Game of Thrones’ that pushed serialized dramatic storytelling in this genre to the next level,” said Geoff Daniels, executive vice president and general manager, Nat Geo WILD. “No spoilers, but rest assured the new season is as visually stunning, intimate and intense as anything we have ever done.”

Savage Kingdom: Uprising returns to the remote wilderness of Africa to delve deeper into the individual characters and reveals the life and death decisions that drive survival in their ruthless and unpredictable world. The story continues as sons plot to overthrow fathers, clans seek revenge on their enemies and new arrivals enter the Savage Kingdom to stake their claim.

Will the aging lion king Sekekama hold on to his bloody crown? Has the leopard prince Neo inherited enough talent from his mother to survive? How will the lions of the Northern Pride wreak their revenge on queen Matsumi? Leaders will rise and factions will fall. No one is safe in the Savage Kingdom.

Savage Kingdom: Uprising: The Enemy Within Premieres Friday, Nov. 24 at 9/8c Male lion Sekekama, the undisputed king of the Marsh Pride, must contend with his three eldest sons who are hungry for power. On the outskirts of their territory, the Northern Pride is growing a bloodthirsty lion army, preparing for revenge against its sworn enemy. Meanwhile, the kingdom’s deadliest leopard assassin, Saba, works tirelessly to make sure her only son follows in her deadly footsteps.

Savage Kingdom: Uprising: First Blood Premieres Friday, Dec. 1 at 9/8c Neo must prepare for life as a solitary assassin, but his future hangs in the balance when his mother is left seriously injured after fighting for their fortress. Pressure mounts as Neo grows stronger and his own father, Dark Eyes, wants him out. Meanwhile, on the edges of the Marsh, the vengeful Northern queens suffer a cruel blow to their growing pride when their drifter king returns.

Savage Kingdom: Uprising: Reign of Traitors Premieres Friday, Dec. 8 at 9/8c The Marsh Pride reaches its breaking point as Sekekama struggles to suppress the rebellion of his three treacherous sons and protect his kingdom. As the Great Marsh withers in the grip of the dry season, Zalika, the hyena queen, raises new troops to prepare for her moment of triumph. And the vagabond Pale Pack of wild dogs fights for survival, driven to desperate lengths for food.

Savage Kingdom: Uprising: King Slayers Premieres Friday, Dec. 15 at 9/8c as part of Big Cat Week The Marsh Pride’s aging king, Sekekama, is forced to lead his family into hostile territory on a mission to save them from a vicious drought gripping the kingdom. His great gamble leads him into a bloody contest against rivals old and new. But his control over one treacherous son will determine Sekekama’s hold on power, and the future of his own legacy.

The last episode of Savage Kingdom: Uprising premieres on the last day of Nat Geo WILD’s Big Cat Week, running Sun, Dec. 10 through Friday, Dec. 15. The buzzworthy Big Cat Week includes innovative new specials featuring world-renowned storytellers. National Geographic photographers Steve Winter and Bertie Gregory track down and capture incredible footage of Brazil’s top predator in Jaguar vs. Croc; famed wildlife filmmaker Bob Poole reveals the intimate story of a cheetah mother and her cubs in Man Among Cheetahs; three prides of lions battle over territory, food and power in the dramatic special Lion Kingdom; and we reveal the secrets of a legendary tigress that famously reigned over her territory in western region of India in the new special The World’s Most Famous Tiger.

What do you think? Do you enjoy nature documentaries? Will you watch the new season of Savage Kingdom?

Please continue the Savage Kingdom series. It is one of the best animal shows that I have ever seen. You captured behavior and emotion that I have never seen on any animal-themed TV/cable/movie, I was so looking forward to the 2019 season (season 4) beginning this Aug. and then . . .nothing. No season 4. What happened? You even advertised the date of the 2019 season opener and then you did not bother to play it. PLEASE, give us at least one more season!

Please have many more savage kingdoms
The best show on tv

Please continue Savage Kingdom it is the absolute best show of all. We must bring awareness to the constant fight to survive by these magnificent beautiful Lions and Leopards and Cheetahs along with the other magnificent wildlife of Africa