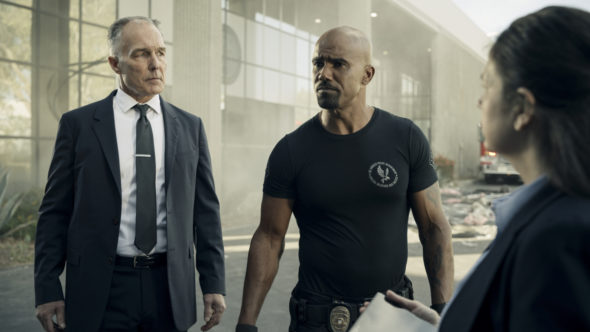 The SWAT team will be returning for the 2022-23 television season. CBS has renewed the police action drama series for a sixth season.

Currently airing on Sunday nights, the fifth season of SWAT averages a 0.47 rating in the 18-49 demographic and 4.44 million viewers. Compared to season four, that’s up by 12% in the demo and up by 40% in viewership in the live+same day ratings (including DVR playback through 3:00 AM). In the live+7 day ratings, the season averages a 0.80 demo with 6.68 million, picking up 70% and 50% in the respective categories.

Moore broke the news of the renewal via Twitter

Check out our CBS status sheet to track the Tiffany network’s new series pickups, renewals, and cancellations. You can find lists of cancelled shows here.
What do you think? Have you been watching SWAT on CBS? Are you glad to hear this show has been renewed for a sixth season?

I’m happy for S.W.A.T. to be renewed for 6th season. I’m always excited to watch it because I love to watch S.W.A.T. I will write 5 stars for the overall ratings.

Thanks for renewing S.W.AT. on CBS and NOT moving it to Paramount+ like you did with SEAL Team.

I love Swat with Mr. Shemar Moore and his co- stars I’m a fan of Swat I’m glad it’s going to season 6.

I am so happy I love swat

LOVE this show! Glad it is being renewed.