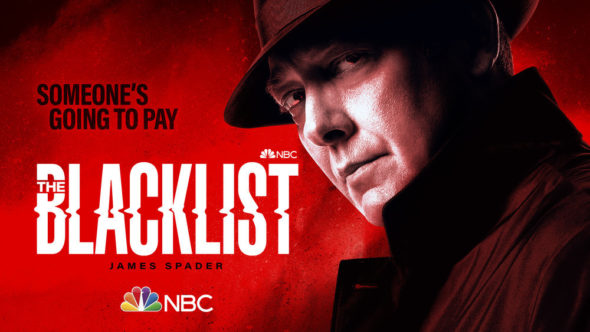 After three seasons, The Blacklist has returned to NBC’s Thursday night schedule. How will this move affect the ratings? Will The Blacklist be cancelled or renewed for season 10? Stay tuned. *Status Update Below.

A crime thriller series, The Blacklist stars James Spader, Diego Klattenhoff, Amir Arison, Hisham Tawfiq, Laura Sohn and Harry Lennix. The story begins as one of the FBI’s most wanted fugitives, Raymond “Red” Reddington (Spader), offers to help the authorities if a specific rookie agent, Elizabeth Keen (Megan Boone), partners with him. As season nine begins, it’s two years since the death of Elizabeth and Red and the members of the FBI Task Force have disbanded. When one of their own is injured in the line of duty, however, the Task Force is drawn back together to bring down a conspiracy that could shatter global security. In the process, they begin to uncover lethal adversaries, unimaginable conspiracies, and surprising betrayals that will threaten alliances and spur vengeance for the past, led by the most devious criminal of them all – Raymond Reddington.

5/28 update: You can see the latest night’s ratings in context.

For comparisons: Season eight of The Blacklist on NBC averaged a 0.35 rating in the 18-49 demographic and 3.26 million viewers.

What do you think? Do you like the The Blacklist TV series on NBC? Should it be cancelled or renewed for a 10th season?

Haven’t made it through season 8 yet, but hoping a bullet or something fatal finds Keen! So over the “I can’t believe you!” drama!! Good riddance!!!! Then the show can go on…and on. I will keep watching

Longevity has ruined the Blacklist.
The TV show itself should be on the blacklist as a target.
Then, the FBI team or Red, can “put it away” permanently.

I have watched The Blacklist since the very first show. I am totally a “die hard” fan. I believe the ratings have dropped due to the fact that NBC is no longer on Dish Network because of the dispute between Dish and Tegna. I am a Dish subscriber, but may have to switch if there is not a quickly remedied resolution.

Well, you apparently have internet access, so you can watch on Peacock or nbc.com (Devil’s disclaimer… not sure how many NBC shows are still streaming from nbc.com, since they seem to be pushing many of them to Peacock “exclusively”.

The Blacklist is a great show. The writers have an amazing imagination, and I love the twists, turns & quirks of the program. Re-new it for the next 15 years at least.

I’ve always loved blacklist whether keen is in or or not✌. I’d love to see another season

Brilliant Show. Hope there is a Season 10

Awesome start of season 9. For me we get a “Redessler” – and yeah it is ok…
Spader as an actor in another dimension. Diego as Ressler seems now as a interesting part for Red, not arrogant; a normal person with pain, heart and emotion.
I love it…
I hope more too come.
And I hoper there will be a season 10….
So go on……