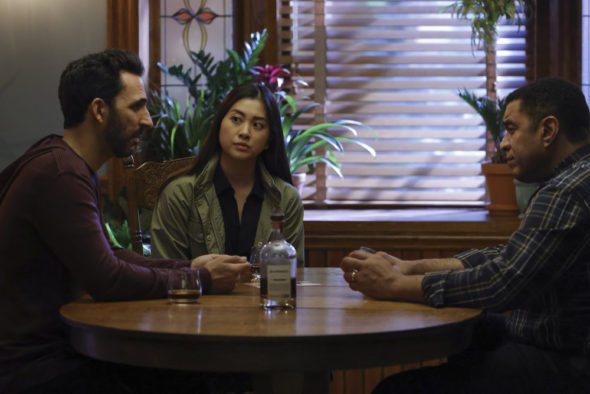 What’s Red’s game in the ninth season of The Blacklist TV show on NBC? As we all know, the Nielsen ratings typically play a big role in determining whether a TV show like The Blacklist is cancelled or renewed for season 10. Unfortunately, most of us do not live in Nielsen households. Because many viewers feel frustrated when their viewing habits and opinions aren’t considered, we invite you to rate all of the ninth season episodes of The Blacklist here.  *Status Update Below.

An NBC crime thriller series, The Blacklist stars James Spader, Diego Klattenhoff, Amir Arison, Hisham Tawfiq, Laura Sohn, and Harry Lennix. The story begins as one of the FBI’s most wanted fugitives, Raymond “Red” Reddington (Spader), offers to help the authorities if a specific rookie agent, Elizabeth Keen (Megan Boone), partners with him. As season nine begins, it’s two years since the death of Elizabeth and Red and the members of the FBI Task Force have disbanded. When one of their own is injured in the line of duty, the Task Force is drawn back together to bring down a conspiracy that could shatter global security. In the process, they begin to uncover lethal adversaries, unimaginable conspiracies, and surprising betrayals that will threaten alliances and spur vengeance for the past, led by the most devious criminal of them all – Raymond Reddington.

What do you think? Which season nine episodes of The Blacklist TV series do you rate as wonderful, terrible, or somewhere between? Do you think that The Blacklist should be cancelled or renewed for a 10th season on NBC? Don’t forget to vote, and share your thoughts, below.

Best series ever. The change of direction in season 9 was awesome.
I can’t wait for season 10.
And Ihm searching for the beautiful song at the end of episode 22 – hope it could be released soon.

Love The Blacklist have not missed one episode in 9 seasons ,miss the really good music but otherwise please continue this Outstanding Show

Please keep the show running. I so look forward to it. James Spader is an amazing actor.

Great season, as every other before. Blacklist is such a unique show. Love it

Jan 6, 2022 episode was not so hot without Reddington. Ressler had only a couple of instances of action. The talking to the headstone was a little to long and the tears from a former agent! I believe the writers could have done better.

Watch Blacklist faithfully. Must admit that we have been waiting for years to find out what Red was too Liz and why he was so dedicated to her…wish we could find out…it’s frustrating!

I continue to watch Blacklist without fail. Some episodes are better than others, but beats so many other offerings hands down. I’m looking forward to follow up episodes after the 12/9/21 storyline.

The problem is with the loss of Jon Bokenkamp. His influence in storyline cannot be questioned. His partner is good but there aren’t the twists previously enjoyed. The cast remains great. James Spader is excellent as usual, though I preferred the short fringe. I still look forward to more linked cohesive story. A tenth season then would be anticipated.