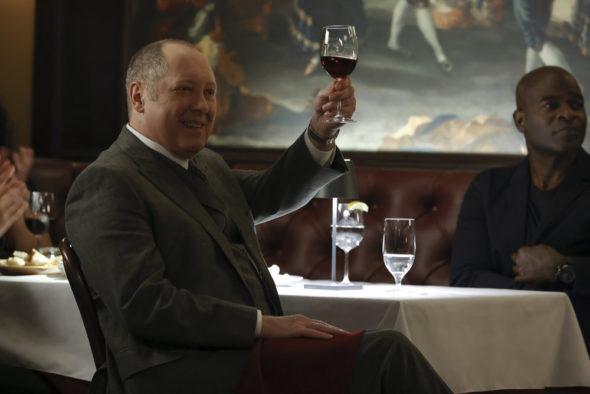 Red will be back from more in the 2022-23 television season. NBC has renewed The Blacklist for a 10th-anniversary year. The ninth season resumes on Friday night.

A crime thriller series, The Blacklist stars James Spader, Diego Klattenhoff, Amir Arison, Hisham Tawfiq, Laura Sohn, and Harry Lennix. The story begins as one of the FBI’s most wanted fugitives, Raymond “Red” Reddington (Spader), offers to help the authorities if a specific rookie agent, Elizabeth Keen (Megan Boone), partners with him. As season nine begins, it’s two years since the death of Elizabeth and Red and the members of the FBI Task Force have disbanded. When one of their own is injured in the line of duty, however, the Task Force is drawn back together to bring down a conspiracy that could shatter global security. In the process, they begin to uncover lethal adversaries, unimaginable conspiracies, and surprising betrayals that will threaten alliances and spur vengeance for the past, led by the most devious criminal of them all – Raymond Reddington.

Airing on Thursday nights, the ninth season of The Blacklist has averaged a 0.35 rating in the 18-49 demographic and 3.13 million viewers. Compared to season eight, that’s up by 1% in the demo and down by 4% in viewership in the live+same day ratings (including DVR playback through 3:00 AM). In the live+7 day delayed viewing, the series is averaging a 0.59 in the demo and 5.01 million, adding an average of 66% and 60% respectively.

This evening, Spader appeared on The Tonight Show Starring Jimmy Fallon, and confirmed that the network had ordered season 10 this afternoon.

What do you think? Are you glad that The Blacklist has been renewed for a 10th season? How much longer do you think this show should run?

I was thrilled to know The Blacklist is coming back for Season 10! The Blacklist is the ONLY show I’ve been addicted to in my entire life. In the 9 seasons aired to date, I have only missed 3 programs on their aired dates and each of those 3 I’ve been able to watch within a few days. I don’t care what day or what time The Blacklist is scheduled for, you can be sure I’ll be REDDY to watch! I hope this show goes on for years! The writers are incredible! I rarely guess what will happen next correctly… Read more »

I hope Blacklist goes on and on until the writers have exhausted every avenue!

It should be renewed as long as possible…..Twist Liz’s return somehow!

I’m a viewer from England and I absolute love this programme. It’s extremely well written and the acting is superb. Thank you America for providing such an enthralling drama.

First of all l would love to Thank the makers of the Blacklist… This one night that we all get to enjoy watching this TV show is the one and only night that I get to have my Family to myself and yes I am being selfish but I get to be selfish with my kids because I am MOM…now a days kids are all about their electronics and their friends! mom and dad they just come last….. But this night the night of the Blacklist we all get together at home everyone turns off the phones and all electronics… Read more »

I feel like at this point, they must be getting a phenomenal syndication deal to get another season since they’re closer to the bottom of the NBC lineup than the top.

The Elizabeth story line was getting tire sum and redundant. With good story lines and good scripts, the series has a great future.

Very few shows have stopped when they should. Monk, for instance; Friends, and How I met your mother. Others — like Supernatural — have completely lost their way. As much as I love The Blacklist, they should just stop.

WONDERFUL!!! I LOVE The Blacklist. It’s one of my favorites!!! I hope it NEVER gets cancelled. Red and Cooper is my favorite character. All the character chemistry is amazing. So happy!!!

This is one of my favorite shows!!! Please don’t ever cancel

Can you add an RSS Feed to your page? That way I can be notified of your new stories from my own Blog.