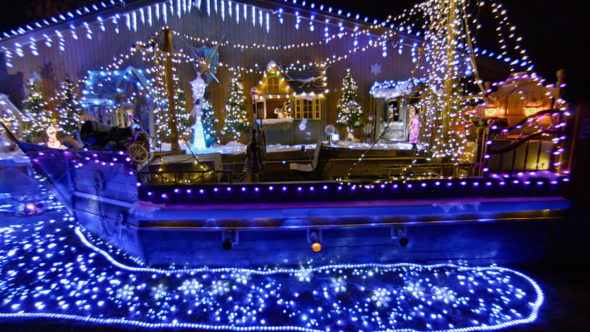 An ABC holiday competition series, The Great Christmas Light Fight follows two judges — lifestyle expert Carter Oosterhouse and interior designer Taniya Nayak — as they assess the creativity and decorating skills of everyday people (albeit ones with an abundance of holiday cheer). Over the course of six episodes (shot in 2020), the duo considers those homes with occupants who take yuletide adornment to a whole new level. In the end, the winners are awarded the coveted Light Fight trophy and $50,000 in cash.

We ‘loved’ the show until this season when they added a ‘voice’ stating the obvious… I would hope that most viewer’s aren’t stupid and can tell ‘when Santa is driving the car’ or ‘ Carter spins the gears’ ‘Cater flips the switch. Lights and… Illuminate.’ It is irritating, not to mention insulting.
Prior to this addtion – we Loved this Show!!!

WHAT HAPPENED???
Why is the show over soon EARLY in the CHRISTMAS SEASON???
Love the show……but you took it away from us SO early. Huge mistake.

I love this show. normally they show it for 4 weeks up until Christmas. I do not understand why they already did a season finale. I do hope to see more. its one of the few shows I look forward to every year along with a few Christmas classics. please keep continuing it.

Love this show. Look forward to it every year. Get to see some amazing, innovative and nostalgic decor. I hope they stay around for a long time. Besides it is a special once a year limited run season. Would love to see a special episode pitting the winners of past seasons against each other and allow the viewers to vote along with the judges.

I can’t really pick one , in Cleveland it’s only been on twice. But they are all good!!!! Being on once a year though is enough.

I also look forward to the Great Christmas Lights Fight. The imagination of the contestants is unbelievable. The time of preparation is hard work. It’s great to see the whole family come together. That makes Christmas joy.

I wait every Christmas for the Great Christmas Light Fight is a great show Please keep it on!