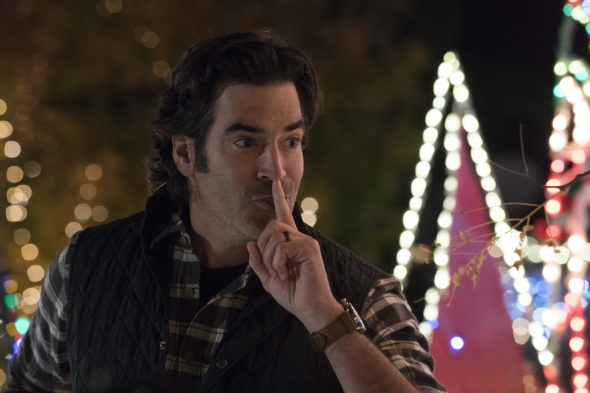 Has this become a bona fide holiday tradition? Is The Great Christmas Light Fight TV show cancelled or renewed for a sixth season on ABC? The television vulture is watching all the latest cancellation and renewal news, so this page is the place to track the status of The Great Christmas Light Fight season six. Bookmark it, or subscribe for the latest updates. Remember, the television vulture is watching your shows. Are you?

A competitive reality TV series airing on the ABC television network, The Great Christmas Light Fight follows judges Carter Oosterhouse and Taniya Nayak as they assess the creativity and decorating skills of everyday people (albeit ones with an abundance of holiday cheer). Over the course of six episodes, the duo considers those homes with occupants who take adornment to a whole new level. In the end, the winners are awarded a cash prize, as well as the coveted “Light Fight” trophy.

Will ABC cancel or renew The Great Christmas Light Fight for season six? It’s a little too soon to use the ratings to predict that, but even with weekly numbers, cancellation or renewal prediction is tricky business for holiday series. The Nielsens are never great, in part, because viewers tend to be busy during December. That’s why many network TV series tend to go on a mid-season hiatus, and it is why those networks fill the airways with holiday specials and lower budget productions, such as this. Still, I will keep an eye on the Nielsen ratings and update this page with breaking developments. Subscribe for free alerts on The Great Christmas Light Fight cancellation or renewal news.

10/8/18 update: ABC has revealed that the series has been renewed for a sixth season. Details here.

What do you think? Are you glad that The Great Christmas Light Fight TV show has been renewed for season six? How would you feel if ABC had cancelled this TV series, instead?

Thanks for the tip!

how can anyone not like christmas lights ? I like the show. sometimes I think the lights on some displays are too much, but pretty to look at.